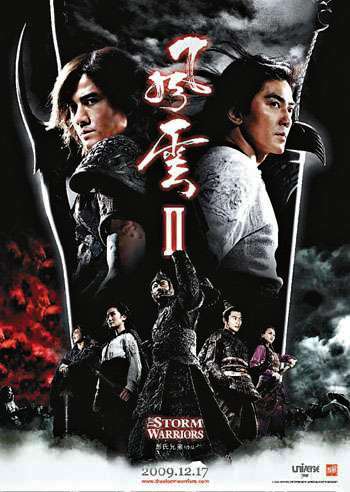 Lord Godless has invaded China and taken over the place, capturing some of the top martial artists due to his invincible armour technique and a power destroying poison. Wind, Cloud and Nameless manage to escape and come up with a plan to defeat the invader. It is decided that Wind will study the Evil Technique under Lord Wicked, due to his more temperate nature. Meanwhile, Cloud studies with Nameless to develop a new sword technique. The Evil Technique is the only style powerful enough to defeat Lord Godless, but there is the risk that studying it will turn the student... evil.

After over a decade it was a surprise to see a sequel coming out to one of my favourite HK films, STORMRIDERS, featuring the 2 original leads... both of whom have thrown off their pretty boy image and grown into quite respected actors in the interim. You wouldn't know that from STORM WARRIORS though, since it is shallower than the merest film of water, with a plot that simply leaves you wondering why you should care. Paper-thin characters wander around (or run, jump and fly around) spouting pompous nonsense, usually about a magic something or other, making minimal effort to convince us that any of what they are saying actually makes any sense. Every so often a fight breaks out, which generally involves somebody posturing whilst the screen fills with special effects.

Basically it's an exercise in special effects, and it does show the tremendous advancement in local CGI talent that has taken place since the original was released - the quality is fantastic, and the film is often beautiful. Unfortunately it is rarely, if ever, interesting... which is a shame. The original film managed to weave an epic storyline and somewhat fleshed out characters around its state of the art (for the time) special effects. After keeping us waiting for a decade, the sequel just can't seem to be bothered.

Basically, STORM WARRIORS is the film that a lot of people unfairly dismissed STORMRIDERS as being!