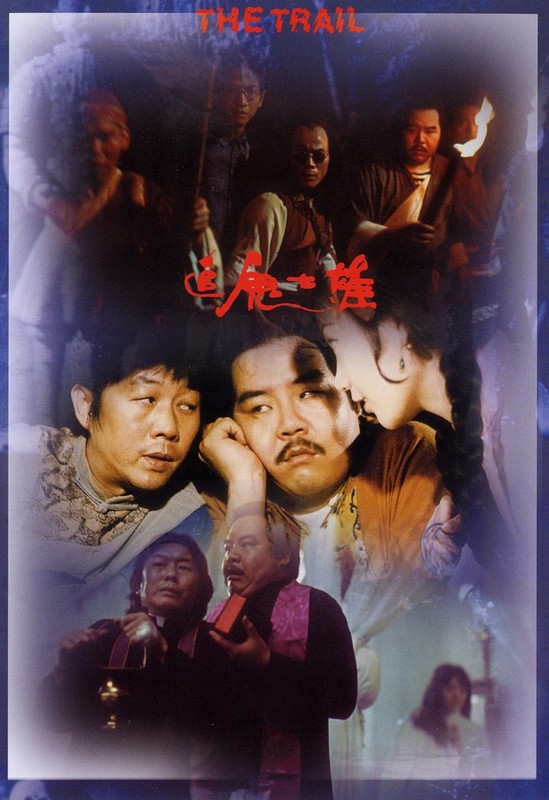 THE TRAIL (1983) is a strange movie indeed. Written and produced by Hong Kong's top comedian Michael Hui and starring brother Ricky Hui and Kent Cheng, it seems that it was planned as a comedy horror in the Mr. Vampire style. It also seems that director Ronny Yu had other ideas, and films the movie totally straight - actually trying to make it scary, even, which is pretty unconventional for a HK horror movie. Scenes that are clearly meant to be jokes in the script are filmed totally deadpan and humourless, creating a strangely sinister vibe. Other parts of the movie are clearly meant to be scary, and almost are - largely due to frighteningly intense synthy music/sound cues.

I'm not sure if the Deltamac DVD offers the complete version of the film, because there are several jumps that defy continuity, suggesting missing scenes. It is entirely possible that Ronny Yu was just trying to be obscure and mysterious though. In particular, the movie quite fails to introduce the main characters or explain what they're up to. For the record, they are a gang of opium smugglers who disguise themselves as Mr. Vampire style corpse herders and hopping corpses, thus escaping too much police attention. It takes some detective work to piece this together though.

The gang accidentally pick up a real corpse during a stop at a town, and things turn ugly when the corpse turns out not to be as dead as it should be. It wants revenge for its murder... and to eat lots of chickens, apparently.

The movie is interesting just for being so unusual. The atmosphere is very dark and moody, and the humourless jokes are novel and peculiar. The completely deadpan performances are not bad, with the show being stolen as usual by the godlike Chung Faat (whose presence is the main reason I picked up the DVD), as a silent but lethal boomerang weilding gang member.

There's not as much action as in other movies of the genre such as Encounters Of The Spooky Kind or MR. VAMPIRE - only a very little bit in fact, and only a smattering of taoist rituals. As such, the movie is not in the same league as those classics, but is an interesting curiosity never the less.