Directed by
Genre
Well worth a watch 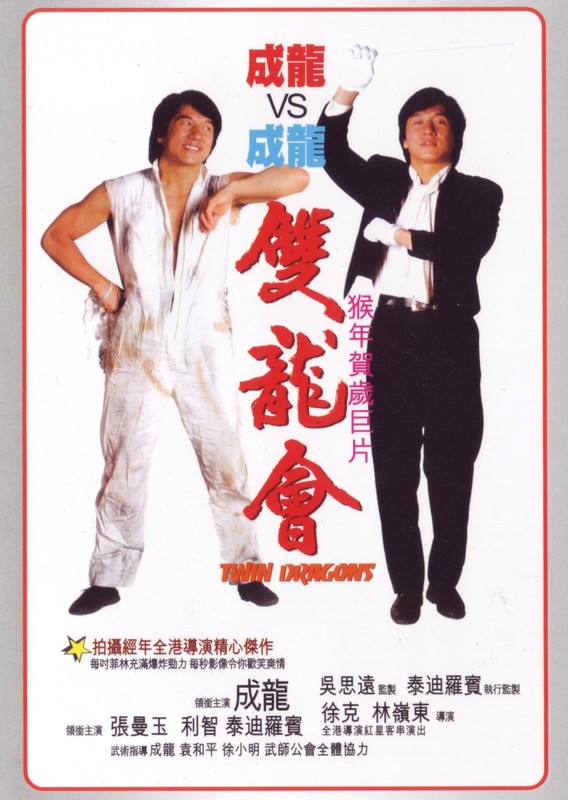 Twin brothers Ma Yau and Bok Min are separated at birth, one becoming a famous concert pianist and the other a rough car mechanic. Like all twins, they have a telekinetic connection which means that when they are in close proximity, one's movements affect the other. When Ma Yau comes to Hong Kong to give a concert, their paths inevitably cross and mistaken identity leads to love and trouble with gangsters.

I gather that TWIN DRAGONS was made as some sort of fund-raising effort for the Hong Kong Director's Guild, and features many HK directors in major or minor parts. The co-directing credits for Tsui Hark and Ringo Lam are curious, because the film doesn't really feel like the work of either. More of Tsui than Lam though, I'd suggest, but I think there were most likely other bums in the director's chair for much of the film.

The film is played for laughs, and the scenario yields some genuine funnies - helped by some impressive split-screen effects which let Jackie share the screen with himself in some quite clever ways. His gift for physical comedy is well utilised, and although there's not a huge amount of action, what you get is of a fairly high calibre. The film features some quite unusual elements for a Jackie Chan film - including on-screen kisses and a quite racy bubble bath scene with the buxom Nina Li.

Given the nature of the project it was never going to produce a classic film, but it's more entertaining than other directorial ensemble pieces like The Banquet (1991), thanks mostly to Jackie's talent and charm. Well worth a watch!