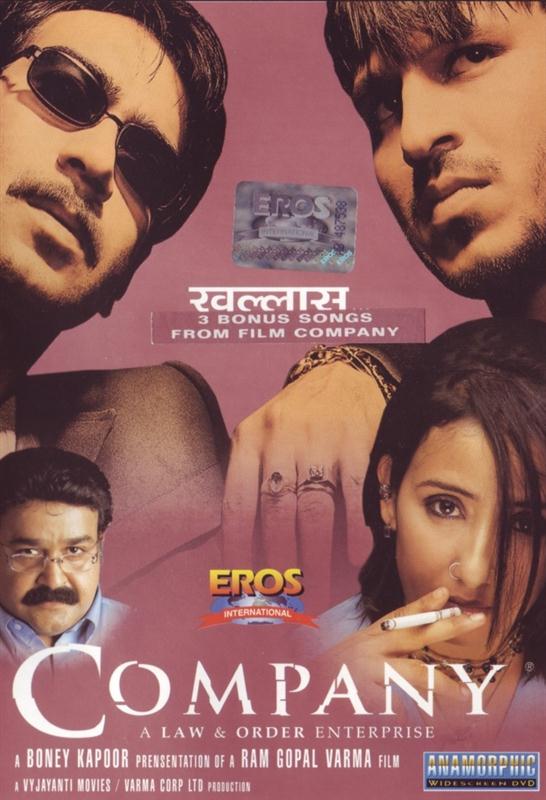 Ram Gopal Varma's Satya is one of my very favourite Hindi movies, though rather an anomaly in the Hindi movies that I've seen. Much darker in tone than Bollywood usually offers, it's also one of the most intelligent movies about gangsters ever made in my opinion. RGV returns to similar themes with his latest movie, Company, but this time brings a whole new style to his direction that makes the movie stand out even more from the Bollywood crowd. The movie still has a grittiness and realism in its examination of the underworld, but this time it is filtered through post-MTV-post-Wong Kar-Wai sensibilities. I've always found Indian movies to have some of the best cinematography in the world, but never seen one that looks like this. Wide angle lenses, cameras half obscured behind the scenery, bright contrast, quick fire staccato editing... all very modern cinematic tricks, and very well done here.

The Company is in fact an organised crime syndicate, which our hero Chandu (Vivek Oberoi) joins at the start of the film. Chandu is the young leader of a small time gang looking to make it big. He earns the respect and trust of company head Malik and quickly rises to be his right hand man. When Malik makes a bid for power, the two of them have to handle the fallout from the quakes it makes through the criminal infrastructure.

Chandu is a similar character to Satya (who is one of my favourite movie characters, and not just because he has the best beard in film), but a leaner meaner more ambitious kind of career criminal. Nowhere near as mean or as hardened as the seemingly imperturbable Malik, however. Malik takes his business very seriously.

The rise to power of a young gangster is a theme that has been handled on many occasions before, and Company is not vastly different to its predecessors... although it is a good reminder of what hopelessly romanticised popcorn fodder the YOUNG & DANGEROUS series are. With almost no song and dance routines, the run time is kept down to a lean 145 minutes, but this is still plenty of time to build and explore the characters and their situations very thoroughly. Company is quite a subtle movie, the pacing not too hurried and the situations mostly underplayed. This, coupled with the depth of the script and the very stylish camerawork and editing, gives the movie a very sharp feel. Another intelligent movie about gangsters, and an unmistakably cool one too.

Sadly, the movie is let down terribly on one front - the soundtrack. Not all the time, but quite often the music is conspicuously inappropriate. Most irritating is the over use of Mussorgski's Night On Bear Mountain at completely the wrong times, but there are other problems too.

Ultimately, I don't think I enjoyed COMPANY quite as much as I enjoyed SATYA. Perhaps this is because this time my expectation and anticipation was higher, but mostly I think it's that Chandu isn't as sympathetic a character as Satya was. Oberoi plays the character quite well, with mountains of cool but a certain amount of depth... but he doesn't command the screen in the same way that J.D. Chakravarti did. This is probably because his beard isn't as cool.

I did enjoy the movie a lot though... the 2.5 hours pretty much flew by, and the script kept me interested all the way through, never becoming too predictable. There aren't a whole lot of laughs in the movie, or even smiles... this isn't the kind of gangster movie that has you rooting for the heroes as they gun down armies of cops (which, incidentally, the heroes here never do... the violence is mostly contained within the criminal underworld). It's a movie that explores what it really means to be a gangster, and the position of crime and criminals within society. Chandu and Malik are certainly presented as the 'heroes' of the movie, but it never glosses over what they actually have to do to get their power.

India is a poor country, and it's a fact that a lot of the movies produced in Mumbai are targetted at an audience with a pretty low literacy rate. Bollywood movies don't tend to be too challenging to watch, or if they do wish to explore a more serious point it is usually done with very little subtlety. I am curious as to how successful Ram Gopal Varma is in India, as the two movies of his that I've seen have been challenging in a very subtle way. He's obviously quite a box office draw as Company is clearly a big budget production. Filming 2.5 hours of that kind of camerawork/editing isn't an overnight task, and extensive sections of the film are shot on location in Hong Kong, Africa and... Switzerland I think. Well, I have no doubt that enough of the Indian population are perfectly well educated and will have no problem appreciating the finer points of the movie - but I imagine that the overseas market must have been in his sights as well.

Company is a movie that I'd like to see get pushed in the US, as it's a nice reminder that the TRAFFICs and co of the world are not exclusive Hollywood property. Sadly, American studios have frequently demonstrated that its not in their interest to promote this fact, so I expect it will be left with this semi-decent DVD release and word of mouth to spread itself around. My word of mouth is a strong recommendation that people seek that DVD out.