Directed by
Genre
Goofy but entertaining 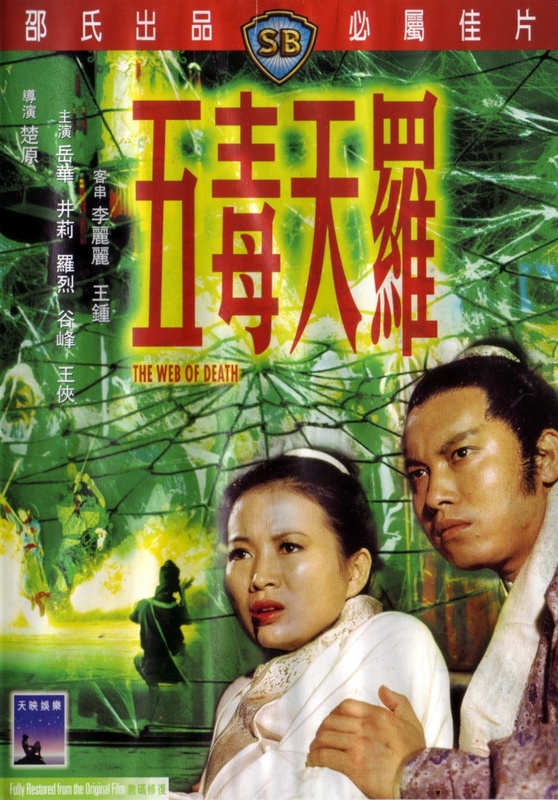 The Five Venoms Clan (not that one) once dominated the martial world with the invincible power of the Five Venoms spider, capable of decimating foes with its lethal poison webs. The clan chief decides the spider is just too powerful and locks it away in a secret place, allowing the other clans to rebuild. A century later some members of the Five Venoms (not those) feel that its reputation is too diminished and they ought to bring the spider back into play, but the current chief won't allow it and nobody else knows where it is kept.

WEB OF DEATH is another Chor Yuen wuxia, this time based on a Jin Yong story rather than the Ku Long stories he preferred, with a screenplay by the insanely prolific I Kuang. The tale of an indominable weapon with which various parties seek to rule the jiang hu is familiar enough that it probably doesn't make much difference who actually wrote it, it would have come out much the same.

The film's main story is less about the spider and more about the relationship between the daughter of the Five Venoms Clan chief (Ching Li) and a young hero from Wu Dang sent out to investigate the spider. The two meet and fall in love, unaware of their identities and the battle that is about to break out between their clans. A Romeo & Juliet tale in other words - though obviously with a higher body count.

We get the usual opulent set designs and fanciful battles, though the action design from Tang Chia and Yuen Cheung-Yan is a bit pedestrian and many of the battles rely more on fireworks and flashbangs than actual humans (or spiders) trading blows. The fact they used an actual spider means that it is hilariously non-threatening in a combat situation... even if it does usually win.

Yueh Hua is surprisingly wet as the male lead and the film definitely belongs to Ching Li - though Lily Li Li-Li offers some stiff competition in a smaller part. Actually the film very nearly belongs to Ching Li's sassy maid, Chan Mei-Hua apparently, who takes a more proactive role in proceedings than maids usually do and creates one of the best scenes in the film.

Lo Lieh is his usual charmingly evil self but he does seem to be phoning it in a bit on this occasion. Wang Hsieh isn't particularly well suited to his character, the Five Venoms chief, it would probably have been better if he'd traded places with Ku Feng.

This definitely isn't Chor Yuen's best work, though apparently I did actually rate it pretty highly when I first saw it so maybe it's that I'm less attuned to Chor Yuen's films than I used to be these days. There's fun to be had with it, but it does tend to be the laughing at not with sort of fun.