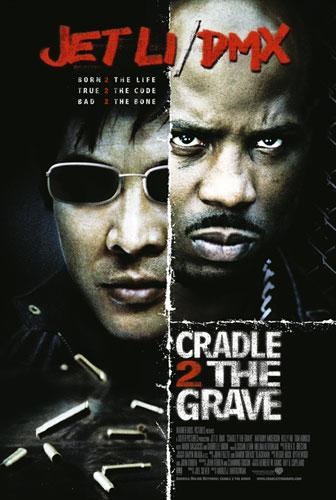 I don't suppose anybody was expecting too much from the director of ROMEO MUST DIE and EXIT WOUNDS, but the promise of Jet vs. Mark Dacascos was at least interesting enough to get me into the theatre. I don't think anybody that's seen RMD will come away from the film terribly surprised by what they've seen.

The plot is a rather contrived and convoluted tale about a gang of gangster (sta?) thieves who get out of their depth when they steal a bunch of mysterious black diamonds. Jet Li is a Taiwanese intelligence agent out to get the stones back, and when they are re-stolen (along with gang leader DMX's daughter), they decide it's in their best interests to work together to get them back. It's basically a "mix n' match" script with virtually no narrative integrity, so it's best not thought about too much. Essentially, it's an excuse to get Jet Li together with DMX and his "crew", in an attempt to appeal to the black audience rightly or wrongly perceived to be the biggest market for "kung fu films" in America.

Although Jet Li gets top billing in the movie, it really seems like he was inserted as an afterthought. The script really had no need for his character, and may even have worked better without it. He has about 15 lines in the whole movie and he fights a bit - other than that he just kind of follows DMX and the gang around, looking mean (and quite devoid of emotion). DMX gets to carry most of the dramatic moments, and I'll concede he's not bad. The rest of the gang have thin motivations (ok, none) and mostly exist as plot devices or comic relief.

In the evil corner we have Mark Dacascos, who doesn't say much either (though more than Jet) but is suitably bad ass. His character serves more purpose and is more memorable than Jet's to be honest. We also have Kelly Hu as the Mean But Hot Asian Bitch, whose character is pretty pointless and only has 3 or 4 lines (which she delivers very badly - she may be cute, but she's no actress).

Then there's the action! Or rather, there isn't. There are two world class martial artists in the cast, and we want to see them fight. And they do... just not very much. Jet kicks a few guys asses near the start, but they're really no match for him and he takes them out in one or two moves. Could have looked cool if they actually filmed it in a way that let you see the moves, I guess. Then there's a fight in the middle which sets Jet against a ring full of "Ultimate Fighter" dudes. This is the action highlight of the film and should have been great, but is almost totally unsatisfying because of the way it's filmed and edited... camera 6 inches away from the fighters, no shot lasting longer than 1/2 a second, no rhythm... "Hollywood style" in other words. Oh, and we also never get to see more than 20 seconds of fight before it cuts away to DMX being chased, or his daughter crying or whatever. Then there's a showdown between Jet and Mark at the end, which looks really promising for about 1 minute then... just ends. Actually it lasts 3 or 4 minutes, but only because it's again intercut with 3 other fights happening in parallel, so you only get to see 3 or 4 moves before it's over to DMX or Kelly Hu for 20 seconds, etc. Let them fight, damn it!

Verdict: pretty poor. I hate to say it, but Jet really needs new management... he needs to get better projects, and I don't think his agent knows how to pick them. Returning to writers like Robert Mark Kamen and directors like Andrzej Bartkowiak shows pretty poor judgment, and doesn't bode well for Jet's future career. Hopefully Zhang Yimou's Hero will be a lot better than any of his American projects have been.