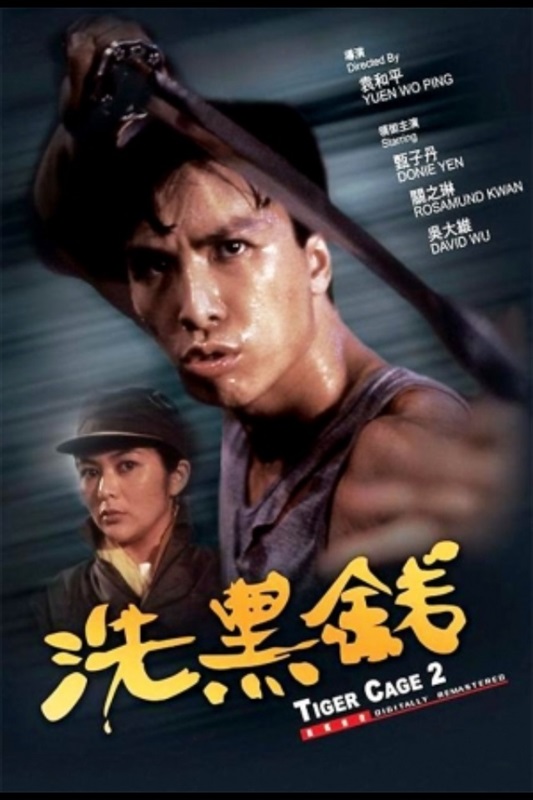 D&B Films definitely had a "house style" when they were around, specialising in gritty modern day police/crime thrillers with bone crunching action choreography - typified by the infamous IN THE LINE OF DUTY series. TIGER CAGE and TIGER CAGE II could quite easily have been entries in the LINE OF DUTY series, if a few more female cops had been thrown in. Conversely, Yuen Wo-Ping's entry to the series (In The Line Of Duty IV) could just have easily been a TIGER CAGE film.

Donnie Yen plays a hot-headed ex-cop whose attitude has got him in trouble with his bosses and his wife. On a trip to the lawyers, he is witness to a robbery where a suitcase of money disappears and a lot of guys get shot. Somehow, he ends up with lawyer Rosamund Kwan on the run from the cops, who think they commited a murder, and from the bad guys that think they have the money. Reluctantly they're forced to form an alliance with one of the bad guys, David Wu, who has been betrayed by the gang.

It's all pretty cheesy and cliched stuff, but carried out with energy and enthusiasm and plenty of action - a typical D&B film in other words. Donnie Yen gives one of his better performances, and Rosamund Kwan is cute and funny. David Wu has to be one of the least charismatic performers Hong Kong ever imported from the US, but this is definitely one of his better roles - he even delivers some passable action (but is clearly doubled for most of the cool moves).

Yuen Wo-Ping's choreography has never been as impressive in his modern day films as in his traditional kung fu or wire-fu works, but he still manages to give his fighters plenty of opportunity to show their skills. Donnie Yen is in great form, giving some amazing kicks. There's quite a bit of gunplay too, which is suitably over the top, HK style, but probably of less interest than the martial arts.

Tiger Cage 2 is unlikely to win many fans on the strength of its story or acting, but it's a must-see for fans of that particularly brutal style of choreography that was so successfully done in Hong Kong in the late 80's. It does come better than this, but not by all that much :)