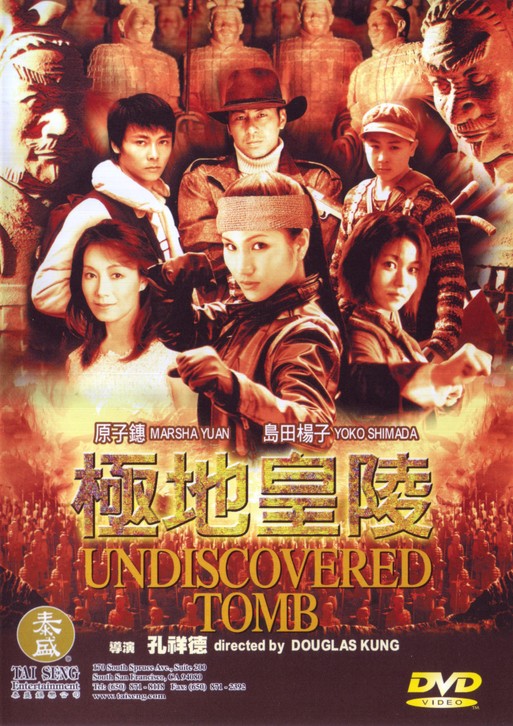 UNDISCOVERED TOMB is completely shameless in its desire to be a "Hong Kong Tomb Raider", and a showcase for Cheng Pei-Pei's younger daughter Marsha Yuen... and why should it be ashamed with such admirable goals? Lara Croft always looked like she learnt her moves from watching Hong Kong action films anyway, so accusations of plagiarism aren't going to fly too far. Marsha Yuen at times looks exactly like her mother did 35 years earlier - i.e. cute as a button - so any excuse to get her on screen is fine with me.

Director Douglas Kung and My Way Productions are a curious bunch, making medium budget films with some fairly big name stars that harken back to Hong Kong's 80's and early 90's output, and turn up on DVD in the UK and US... but don't appear to have any distribution at all in their native Hong Kong. I'm sure there's a story behind that!

UNDISCOVERED TOMB is definitely a B movie, but not a cheap one - there's some slick cinematography and action work, and some great locations. Marsha Yuen plays Lara Croft, effectively, with some sidekicks on a quest to rescue artefacts from China or something like that. There's some villains, some betrayals and some enjoyable kicking of butt. The action is closer to the more stylised work of contemporary action films like So Close and of course TOMB RAIDER than the bone-crunching Girls With Guns films of yore, but it's nicely put together. The script is cheesy and not even slightly deep, but it's a fun tale of adventure. And Marsha Yuen looks lovely!

All of which makes it quite a worthy film, if not a classic (which it clearly has no pretensions of being).