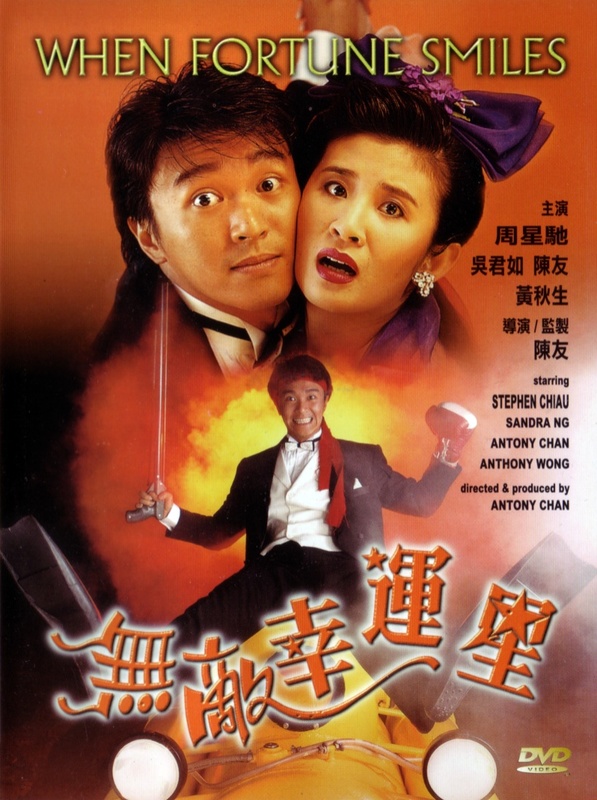 When the rich head of a large jewellery firm dies, he chooses to leave his estate to his daughter (who has been living in France for 10 years) rather than his obnoxious son (Anthony Wong). Wong fortuitously finds that a HK garbage collector (Sandra Ng) looks exactly like the daughter, and hatches a plan to substitute her in the family and hence acquire the wealth.

Meanwhile, the son of the estate executor also hatches a plot. First he employs trickster Stephen Chiau to steal the will and change the name, but after being convinced that this won't work he decides to get Chiau to pose as Sandra's childhood lover, and get the wealth when he marries her.

A moderately unlikely plot that sets up the "imposters don't know the other is an imposter too" scenario, but unlikely is OK because it's not a serious film. In fact, this appears to be one of Chiau's first comedy roles... and he really shines in it. Not the first comedy role for Sandra Ng, but possibly the first in which she isn't really annoying. I suspect this entirely due to her hair, which isn't big and stupid here for once!

The movie is directed by Anthony Chan, who also pops up from time to time as a private detective that Chiau gets to help him by playing to his ego. He gives a very amusing performance, and handles the duties behind the camera equally well.

The plot has a lot of situational comedy, and some of it is just fantastically amusing. My favourite scenes were the short appearances of Anthony Wong's wife (Mui Siu-Wai), she was just hilarious. I think I've seen her before and also noticed how much she shined at comedy.

Both Chiau and Sandra Ng give hilarious performances too, and as well rounded characters they come off well in more serious sections too. Anthony Wong overacts somewhat, but doesn't get chance to do so often. Shing Fui-On is loveable as ever :) Billy Chow pops up once in the middle and for longer at the end to inject the action quotient into the movie. Not great action (not an action movie), but Billy is impressive.

Overall verdict... this movie made me laugh out loud more than I have done for a while - one of Chiau's best in fact. Hidden gem award!