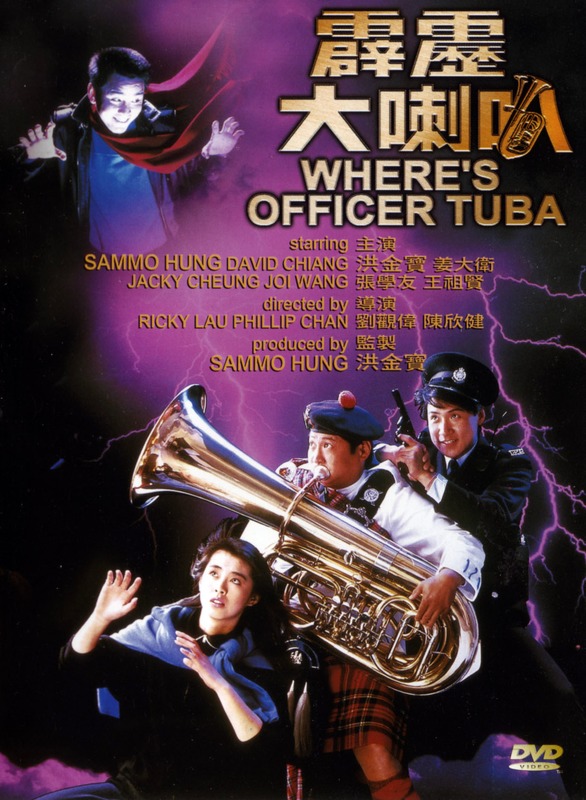 It seems to me that it's not an unreasonable ambition to watch every movie that Sammo Hung has been involved with, because experience suggests that anything he touches tends to be several notches more enjoyable than the average movie. WHERE'S OFFICER TUBA? features Sammo in the title role, and also as producer.

Sammo plays a cowardly cop called Tuba, who gets caught up in a case involving a gang of extortionists. When the officer leading the case is fatally shot, his dying wish is for Sammo to take vengeance. Sammo decides this is much too dangerous and pretends he never heard it, but when the cop's spirit starts haunting him he is forced to get involved.

WHERE'S OFFICER TUBA? is one of those typical 80's D&B productions that mixes in a little bit of everything except coherency, with very variable results. We get a motley mixture of slapstick physical humour, where Sammo excels, farce that is occasionally funny but mostly just dumb, and sexist/misogynistic humour that is downright distasteful. It's sad that many of Sammo's movies from the 80's feature pretty bad attitudes towards women. WHERE'S OFFICER TUBA? is at least not too bad though, and doesn't totally revolve around it like the My Lucky Stars series.

The script for the movie is sketchy - by which I mean that there is the main plot arc that fills maybe 30% of the run time, a romantic subplot with Joey Wang that fills another 30% and lots of skits and sketches with little relevance or connection to anything else that fills the rest. It's a distinctively Hong Kong movie, in other words.

Being a Sammo production there is of course some action, and this is probably where most of the time and budget went. Most of it is concentrated in the last 15 minutes, which is a good bone crunching showdown featuring Sammo's always excellent choreography. Hwang Jang-Lee turns up as a master-kicking villain, and his fight with Sammo is superb.

The movie is definitely a mixed bag, with some very weak moments and some great moments. Overall the balance comes down on the side of "enjoyable". Recommended mainly for Sammo fans.

NOTE: The plot for this movie was lifted pretty much wholesale for the superior Stephen Chiau movie LOOK OUT, OFFICER!