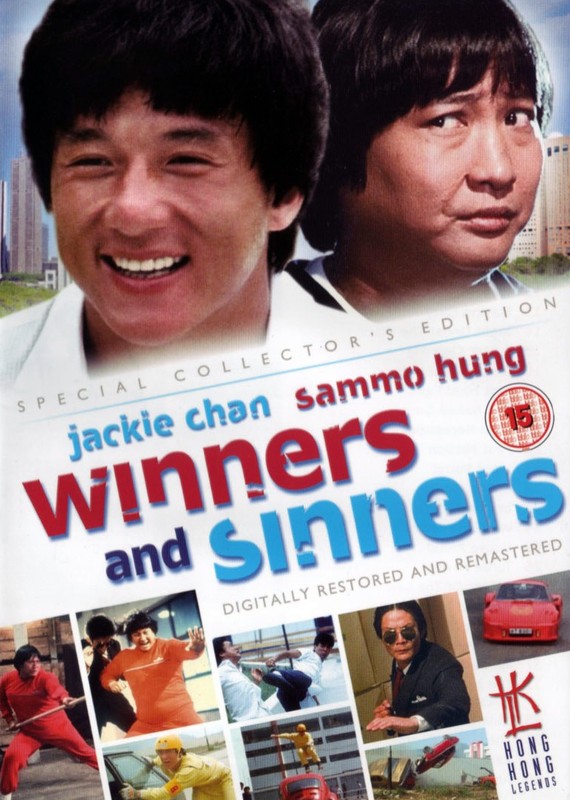 I'm not really a fan of the Lucky Stars films, mainly because they include some distasteful treatment of women, but also because I'm not terribly amused by them. However, I remembered WINNERS & SINNERS being somewhat better than the others, and a revisit via the nice HKL dvd confirms this to be the case. In fact, it's one of the funnier HK films not to star Stephen Chiau.

A couple of points to note: Firstly - forget the plot, it doesn't exist. A few things happen throughout the film that loosely form a narrative, but they're not important. It's about the characters and the comedy situations. Secondly - don't go in expecting a film with Jackie Chan and Yuen Biao, no matter how many video & dvd companies try to convince you that's what it is! Yuen Biao is in for about 1 minute; Jackie maybe gets 15, but he's really only there to pull in the crowds and the film would be a little less entertaining but still work without him.

What you will get in the film is Sammo Hung giving a great & well-rounded (ha ha) performance, Richard Ng being a comic genius and James Tien a fantastic villain. The other Lucky Stars do a good job too, and there's a huge supporting cast of characters who get their moments to shine.

The real stars though (to use a cliche) are Sammo and Barry Wong, who write and direct comedy that manages to be simultaneously crude, absurd, intelligent and sometimes rather dark. Many of the jokes and situations are layered so that the humour can be appreciated on different levels, which is quite an accomplishment. You definitely need to be a bit of a HK afficianado to fully appreciate some of the comedy, e.g. spoofing and satirising various actor's images - the casual Jackie Chan fan just isn't going to get a lot of it, but because the comedy is multifaceted they can probably still enjoy it.

There's some fights & stunts of course, and they're quite decent, but they're just the icing on the comedy cake rather than a major focus of the film.

It's a bit of a shame that Winners & Sinners spawned so many sequels (and not obvious unless you are aware that the Chinese title IDs it as the first film of the Lucky Stars series!), because later installments were rather too formulaic and crass, which means Winners & Sinners gets pulled down a bit by association. If it had been a one-off it would probably stand in higher regard now. Obviously it was very popular in Asia when released though, or there wouldn't have been so many followers & imitators for years to come. I guess the Jackie Chan involvement means that the film has had more video & dvd releases across the world than most HK films of the era, so I guess it still classes as a "popular" film now, even if it may be hard for many viewers to simply appreciate it on its own merits.

Which merits I will finally place a number on after rambling far too long - 7.5/10.