Directed by
Genre
Superficial but slick and polished 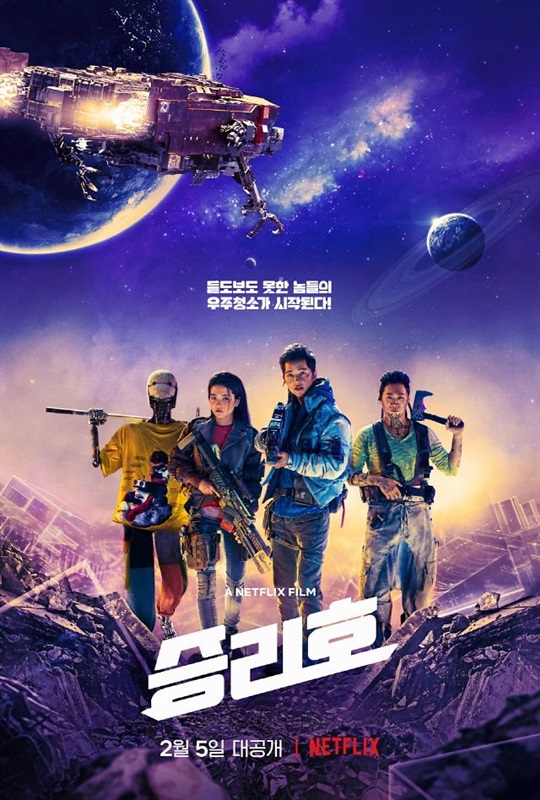 After the Earth is rendered barely habitable by pollution and climate change the wealthy elite establish new homes in orbital cities, with space colonisation pioneers the UTS Corporation and its CEO becoming the richest entities in the system. But space still needs cooks and cleaners, so an orbital underclass soon develops.

The crew of the Victory just about eke out a living collecting space junk and processing it for salvage. They're not well liked by their peers due to their mercenary approach and money above all attitude.

One day they find a little girl in a space wreck, and once they recognise her as the missing humanoid weapon of mass destruction whose picture is being broadcast on the news channels they figure they're in for a big paycheck - either from the authorities or the terrorists that stole her. But as they spend more time with her, they start to question whether such an adorable kid can really be the devastating weapon they say she is, and whether there are limits to what they will do for money after all.

SPACE SWEEPERS screams "blockbuster potential", a slick sci-fi romp with space action, high melodrama and a sassy robot that gives off GUARDIANS OF THE GALAXY energy but manages to keep a South Korean flavour. It's big and brash and the social commentary is paper-thin, but it efficiently serves up a collection of more or less likeable characters and flings them into a high stakes adventure with large dollops of cuteness from secret weapon Park Ye-Rin.

The script is a pretty cliched but is at least coherent, which is more than can be said for some big-budget sci-fi (yes I'm looking at you, RISE OF THE SKYWALKER). The film definitely aims for the heart not the head, but it managed to play my emotions effortlessly... I may or may not have shed a tear at the end.

Space is populated by a pleasingly diverse cast of characters in this film - the crew of the Victory are all Korean but the rest of the cast features a wide range of languages and ethnicities. I wasn't entirely convinced by the casting of Kim Tae-Ri as Captain Jang, unfortunately - she looks so young that she comes across more like a stroppy teenager than the bad-ass veteran captain of a spaceship. Song Joong-Ki is a little too handsome and clean-cut for the character he plays as well, and probably wasn't meant to be quite as annoying as I found him. Thankfully any weaknesses in their performance are more than compensated for by the robot voiced by Yu Hae-Jin, full of character despite being CGI. Jin Sun-Kyu also fits his role well, but the real star of the film is Park Ye-Rin - she is really surprisingly good given that she was maybe six years old when this was filmed. I enjoyed Richard Armitage's performance as the primary villain too.

SPACE SWEEPERS manages to follow a formula without seeming too formulaic, thanks to its brisk pace and some snappy dialog. It's pure entertainment and spectacle, there's little that would pass as art there, but it hits all the right beats and is polished to a fault - it's the sort of film that really does deserve to be seen in a cinema, and it's unfortunate that the COVID-19 pandemic prevented that from happening.