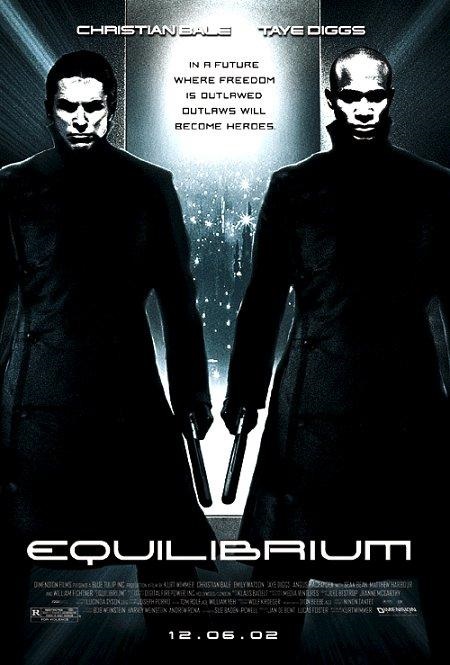 I was intrigued but a little apprehensive after seeing the trailer for Equlibrium. It looked like the movie at least promised some stylish action, even if it looked otherwise rather cheesy.

Well, turns out the trailer does not mislead too much. There is some stylish action, and the movie is *immensely* cheesy, pretentious and predictable with its story of rehashed 'Big Brother' paranoia and its muscled, chiselled and utterly wooden star. The style of the movie (costumes, sets etc) is also similarly derivative and generic... a vision of the future seen through well used and worn spectacles. It does present some impressive views through the lens though.

The movie seems almost keen to be a b-movie, with the all round cliche and borrowed philosophy. Definitely a movie to leave your brain at home for.

So the movie's mostly a bust on the script/character/acting front, but what about the action? After all, that's probably all people *really* care about, and it's clearly where most of the love and attention has been focussed. The 'Gun Kata' style (a fictional martial art based around guns) is quite a new concept in action cinema, and looks pretty cool... when you can tell what's actually going on at least. It's not often you see a new style of action, so the movie deserves commendation for that. It looks totally impractical and unconvincing, of course, and is not in the same league as the Hong Kong style gunplay it presumably wishes to compete with.

And there's not *nearly* enough of it for a 110 minute movie. Basically you get 2 minutes of action at the start, a couple of bursts of about a minute each throughout the movie then a 5 minute finale. Now the finale is quite jaw dropping - very well choreographed and filmed, but it's a bit of a short climax to justify sitting through the rest of the film.

The Gun Kata was a nice idea, but needed to be explored and developed a lot more if it was to support the entire movie on its back. And since the movie is weak in pretty much every other respect, it seems like the action was the only thing that could have taken on that burden. In other words, Equilibrium is pretty much a bust. It was pretty clear that everybody in the theatre was pretty disappointed when the credits started to roll.

Sure there are many worse movies out there, and Equilibrium is one of the few movies in 2002 to contain *anything* new, but ultimately I can't say that it's terribly successful as a movie.