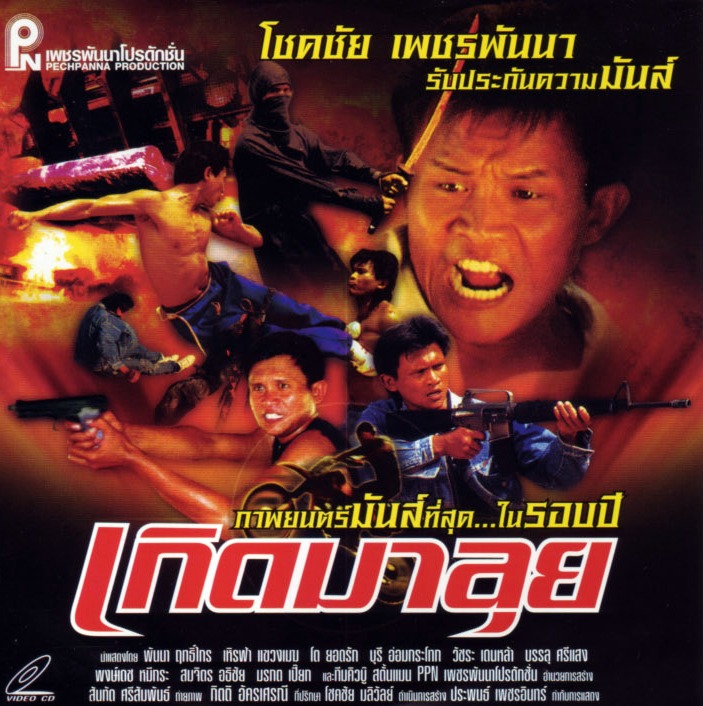 Panna Rittikrai is the long-unsung hero of Thai martial arts cinema, having taken a love for Hong Kong-style martial arts cinema and his own training in Thai martial arts, a crew of insane stuntmen and almost no budget to create a string of films over several decades that almost nobody outside of Thailand ever saw... until the 21st century, when his protege Tony Jaa made an international splash with Ong Bak, for which Panna was the action director.

Panna followed ONG BAK with the self-directed Born To Fight, aka GERD MA LUI, which featured even more insane stunts and fights. However, this is not the film I am reviewing here - it took its name from an earlier film in which Panna was the star - it's often dated to 1978 or 1979 on the web, but I think early to mid 1980's is a more likely estimate. The web will also tell you that the 2004 film is a remake of this earlier piece, but this is not true in any traditional sense - ie. the plots of the films are completely different. If it's a remake in any sense, it must surely be unique in that it is just a remake of the action scenes - many of the stunts seen in BORN TO FIGHT (2004) are echoed in GERD MA LUI, and some in ONG BAK too. Perhaps Panna wanted to finally show the world what he could do 20 years earlier, when his skills were a match for Jackie Chan or Jet Li's - but had to settle for demonstrating it via the proxy of his young students, who were more likely to survive the ordeal.

The earlier GERD MA LUI does lack budget and technical finesse in a big way compared to the latter, but the talent and dedication of the stunt crew is at least as unquestionable. Panna's speed, agility and strength are the equal of any of his contemporaries, and he has clearly mastered numerous styles and forms. He puts all of this knowledge to worthy use in a series of full contact fights and stunts that are as dangerous-looking as anything to come out of Hong Kong. Nobody is pulling their punches (/kicks/knees/elbows) and it's a miracle some of the stuntmen can stand up after some of the blows they receive. In fact, the only reason I can think of for the bad guys in the final scene to be wearing balaclavas is that many of the stuntmen could NOT stand up afterwards (possibly for months), so they had to keep swapping in new victims.

The plot is of course quite forgettable - and quite confusing - but there is some funny dialogue in places. Acting and cinematography are dreadful, and there are really no production values to speak of - this is cinema made out of passion and dedication, not money (I hope it therefore at least made enough profit to cover the stunt team's medical expenses!). By any standard except 'amazing fights and stunts' it's a terrible film, but viewed from the action perspective it's impressive stuff. Weighted score... 7/10.

The new US DVD is badly cropped, and appears to be taken from a VHS - but that's probably all that survives. The addition of subtitles does make it a worthy upgrade from the Thai VCD though. There's a fair number of extras on the disc, but I haven't looked at them at all so I can't vouch for their value.

Incidentally, I don't think Born To Fight is an accurate translation of Gerd Ma Lui - best I can make out, it actually means something like "Come and get it if you think you're hard enough" :-p

aka BORN TO FIGHT