Directed by
Buy it... it's a work of genius! 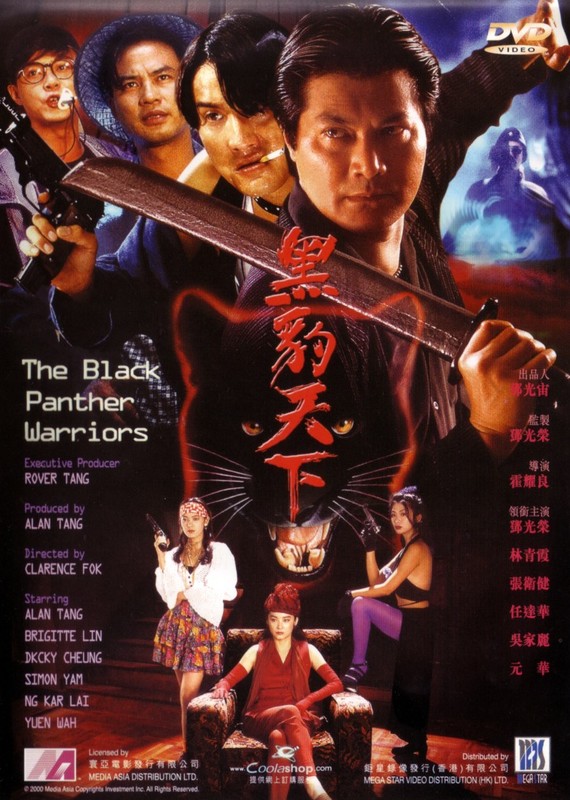 How do you review a movie so completely demented that it makes Eagle Shooting Heroes look like Ashes Of Time?

Clarence Fok/Ford has had a pretty hit & miss career as a director. When it all comes together for him, he produces some amazingly inventive and stylish low-budget movies. When it doesn't, he produces something *completely* stupid. BLACK PANTHER WARRIORS must surely be the pinnacle of his career - a movie that is both so completely stupid and so mind-bogglingly inventive that we probably need to define a new word just to describe it.

The movie is a manga-esque modern-day wuxia piece, sharing some similarities of style with Saviour Of The Soul and HEROIC TRIO. Black Panther (Alan Tang) brings together a party of superhero-esque criminal types (Brigitte Lin, Tony Leung Ka-Fai, Simon Yam, Carry Ng, Dicky Cheung and some lass called Jennifer Chan) in order to pull off a job set by Melvin Wong. Their task is to steal something from a police station that has just had a new hi-tech security system fitted - ostensibly to test the system for the police (but I'm sure nobody believes that for a second). After setting this up, the movie pretty much abandons the plot for most of an hour in favour of comedy/action setpieces that fly by at such a relentless pace you can barely blink. The DVD has absolutely dreadful subtitles - at the bottom end of HK subtitling even - yet you can't help feeling that the best subtitles in the world still wouldn't make any sense out of the movie.

The movie is basically absurdist, and you have to be in the mood to just go along with it and laugh to appreciate it I guess. It is also one of the most insanely inventive movies Hong Kong has ever produced, and very stylish despite the obvious budget limitations (any movie that lists 6 cinematographers, including Jingle Ma and Arthur Wong, has to look good). The comedy and the action are both propelled along like a nitro-fuelled juggernaut, a virtual assault on the senses. It's not enough that in every scene the characters seem to be wearing completely different and inexplicably outlandish costumes - there's also barely a moment when they aren't flying & spinning around the room or blowing something up with playing cards... or breakdancing, or sucking on Simon Yam's nipples or whatever fits the moment. There is an absolute ton of action here, with crazy wirework & stuntwork that has to have been pretty much the pinnacle of HK's early 90's delerium. Mind boggling, and nicely done. The gunplay is absurd too, with thousands of enemy goons meeting their end under Leung Ka Fai's sprays of bullets or Brigitte Lin's general ability to make everything around her explode. This is the kind of movie where somebody sweeps a sword and an entire building explodes.

I dread to think what cocktail of drugs Clarence Fok must have been on to come up with this, and to actually see it all through to completion - must have been exhausting. He deserves a medal, as do the crew who managed to carry off such an insane plan. The cast all do a great job - good comic performance from Leung Ka Fai, smooth gigolo performance from Simon Yam, sexy temptress by Carrie Ng and tragic grace from Brigitte Lin. Alan Tang is pretty cool as Black Panther (Black Cougar in the subs, duh!) too, though he's the least interesting of the characters. Yuen Wah has a small but interesting role as... well, I'll let you guess whether he's a hero or villain :)

It's all low budget, it makes little sense, but it's an undeniable sensory and psychadelic experience where 'anything goes' is putting it mildly. One of those movies that only early 90's Hong Kong could produce, the type that made so many of us fall in love with HK movies in the first place. Definitely recommended!