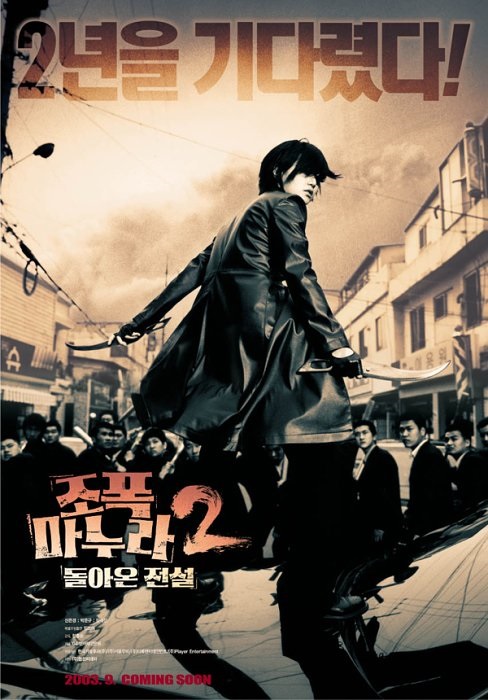 I was one of those that thought the original My Wife Is A Gangster was one of the best films Korea has produced - a wonderfully pitched "Gangster Out Of Water" comedy (the first?), with great action scenes and a superb performance by Shin Eun-Kyeung.

I pre-ordered the sequel as soon as it became available, despite some reservations because I seemed to have heard nothing about the film, good or bad. The sequel to such a popular film should have had some kind of buzz around it, even if it was just people saying it sucked.

Well, let me be the first to say it, apparently... MWIAG2 SUCKS. Big time. Almost everything that made the first film great is missing. A large part of the blame goes to the always dubious plot device of amnesia that starts the film... almost literally. She's lost her memory before she's even spoken a line, and then we cut to 2 years later where she's working as a delivery girl in a restaurant. The fact that she's lost her memory means that she's lost almost all the gangster traits that made her character so great in the original. Apart from occasionally kicking somebody's ass, she's pretty much just a delivery girl.

The bad guys from the first film are back, and this time... they're trying to force the local shopkeepers to sign over their leases so a big company can build a huge mall. Possibly *the* most done-to-death storyline in history... is that all they could come up with? Amnesia and big companies squashing the local community?

There's also the requisite and pretty dull love story... the boss of the noodle shop where Eun Jin now works is a single dad raising a troubled teen, who fancies Eun Jin as a new mother/bed partner (not unreasonably). Several of the other local shopkeepers fancy her too, much to the anger of their wives. The husband that provided the main narrative impetus of the original film does NOT appear in the second, and her marriage is only vaguely alluded to in one scene - despite being the central plot device in the original, it might as well never have happened as far as the sequel is concerned.

The script for the film is a hodgepodge of cliches and lame gags that barely makes a coherent whole... it smacks of a commitee script, with producers, marketing people and other execs coming up with the ingredients they feel the film must have (Hollywood style writing)... and the result is predictably uninspired.

The film has a few randomly scattered action scenes, that feature the wire and camera trick heavy style of the original, but not so well filmed, edited or choreographed (or perhaps I was just too distracted by the obviousness of the stunt double). Not bad, but not as cool as the first film's sequences.

All in all, the film is in every way inferior to the original, and due to the amnesia plot device is barely recognisable as a sequel anyway. Very disappointing.

The Zhang Ziyi appearance that was much hyped prior to the films release is basically a 1 minute segment tacked on to the end, having no connection to the rest of the film. She turns up at a dock, looking stunning, then whips out a sword and does some Crouching Tiger parody moves... and then the film ends before the girls really start to fight. This is still probably the best part of the film, and may be a teaser for the 3rd part of the series, which can hardly fail to be better than the 2nd.