Directed by
Genre
Was hoping for more 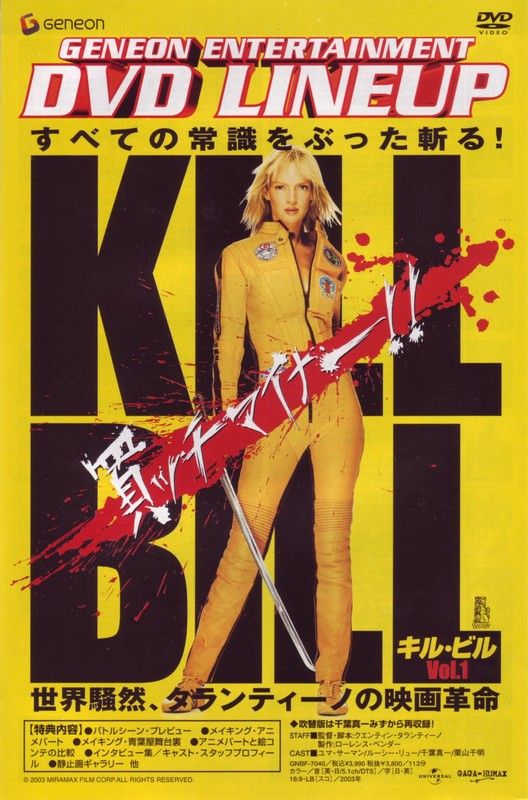 Well, maybe it's backlash syndrome, but I spent most of KILL BILL's 1h50 running time thinking "when can I leave?". Although there were a few great moments (especially the anime section, and the fight with Chigusa from Battle Royale - i.e. the parts where QT had the least direct involvement?), I thought it was mostly... self indulgent, and unengaging?

The biggest problem I had was with the dialogue - is this really the same guy that rewrote the book on dialogue in RESERVOIR DOGS? Some of it is just so banal I wanted to throw things at the screen. The editing of the film is also suspect - some scenes are interminable, and the mild non-linearity seems contrived and accomplishes little. I know we're only half way through the story, but I still have *no* idea who The Bride or Bill really are, anyway - the only character in the film that gets any real development is Lucy Liu's.

I think the 2-part decision was a late one (though QT should surely have realised at a fairly early stage that he was going to have over 3 hours footage, and Harvey Weinstein is the last person in the world to release a 3 hr film). I'm sure that it was a deliberate choice to try and make us think "ooh, who is the bride? Who is Bill? Why did he fuck her over?" - the beeping out of her name in the early scenes was surely just to draw our attention to the fact he won't even tell us her name... but the lack of any real information about the characters just brings up another question, presumably unintended - "Why should we care?".

I never thought I'd hear myself saying this, but the violence and swearing just seemed gratuitous too. I have no objection to enormous quantities of both when used well, but here it just didn't seem to serve a purpose or achieve anything.

So, maybe it's just that my expectations or hopes were too high - I guess the film is more interesting than most Hollywood efforts, and there were some things I liked - it was cool seeing people like Sonny Chiba and Gordon Liu up on the big screen, the soundtrack was v. good, the anime section was superbly done, and most of the fights were good.

I decided to see if I would like it more on a second watch with adjusted expectations, so went to see it at the cinema again. In fact my reaction was almost exactly the same, except this time I fell asleep around about the time she reached Japan :p I woke up just at the start of the Crazy 88 fight, so I was a pissed that I missed Go Go but not at all upset about missing anything else.

So, my conclusion is still that there are some great moments, it's generally well filmed, but it's just an ok film. I'll be going to see Pt. 2 in February anyway, but I was hoping for something more.