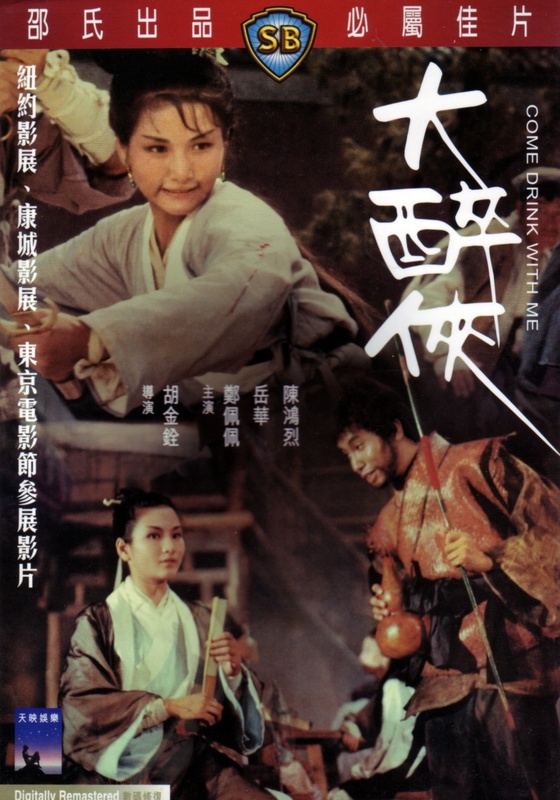 This is the movie that started it all, the watershed wu xia movie in Hong Kong to which pretty much all the kung fu and wire fu movies owe a debt. King Hu was the visionary director who introduced this new style of movie making to the world, and COME DRINK WITH ME is the movie where he first did it.

Such an important movie in HK history was clearly going to be one of the jewels in Celestial Pictures' remastered Shaw Brothers series, and indeed it was chosen as the flagship title - a restored print did a small tour of the world to build up interest in the catalog and secure distribution. The DVD was one of the first released, and is a very nice package with beautiful picture and sound quality, great subtitling and an interesting set of interviews. After so many years it's great to see the movie looking and sounding so good.

COME DRINK WITH ME begins with a group of bandits attacking a government party and capturing an official, who they hope to use as a hostage in exchange for their leader, currently in prison. The government sends out an agent to negotiate the deal, the legendary swordsman Golden Swallow. Golden Swallow is played wonderfully by a young Cheng Pei-Pei, in the "woman dressed as a man" character that would become a regular wuxia feature. They first meet in an inn that strongly resembles that from Dragon Inn 1992, where they engage in a battle of words and martial arts prowess that leaves the bandits in no doubt that Golden Swallow is not about to let them get away with their plans.

Like seemingly all King Hu movies, the plot is layered and intricately woven, full of intrigue and politics and power plays. There's always more going on than meets the eye. It manages this without being at all difficult to follow though, unlike many of its imitators and successors.

COME DRINK WITH ME is full of colourful characters, such as the cheerful bandit Smiling Tiger or the singing drunken beggar played by Yueh Hua. Without a doubt the movie belongs to Cheng Pei-Pei though, who is beautiful, graceful, fierce and proud, and a tremendous fighter. It's easy to see why audiences loved her, and her character left such a lasting influence on the wu xia movie.

The production values in the movie are very high, with beautiful sets, locations and costumes and very nice cinematography. King Hu's skillful camera work is legendary, and if the imagery is not as memorable as the imagery in Hu's later work such as A Touch Of Zen it is still of very high quality and way above its peers.

The action scenes are probably the main legacy that Come Drink With Me left behind it though. As all the interviews on the disc agree, Hu's approach to choreographing and filming the sword fights raised the bar of Hong Kong martial arts movies to unparalleled levels, and really started the 'fight scene as art form' philosophy that would quickly come to be the defining characteristic of the colony's cinema. By todays standards there is no question that the fight scenes look slow and crude, and are a long way from the grace and beauty that the wu xia movie would eventually achieve under directors such as Tsui Hark and Ching Siu-Tung (who has a small part in the movie as a child actor!). However, many of the cinematic styles and techniques were making their first appearance in this movie, so it is fascinating to see them and imagine how exciting they must have been to audiences at the time. The image of Cheng Pei-Pei with her twin short swords is one that will linger in the memory for some time even now.

COME DRINK WITH ME had quite a reputation to live up to, and the difficulty a keen viewer had in seeing it until now doubtless enhanced that. Probably there will be many viewers that wonder what all the fuss was about, but I think few could dispute that it is a well crafted movie even without considering its historical importance. As is obligatory with any King Hu review though, I do have to point out that it is not as good as A TOUCH OF ZEN :p

Recommended viewing, and if you're interested in checking out some of Celestial Pictures' new remastered Shaw Brothers, COME DRINK WITH ME may well be the best place to start.