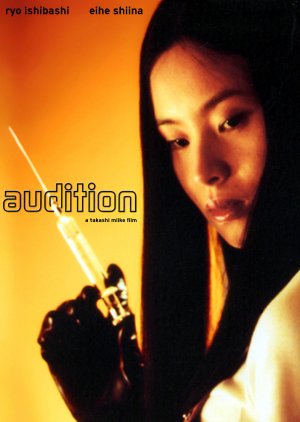 AUDITION is ostensibly a japanese horror film, but it's not really scary - just disturbing. In fact it's something more than a horror film - it's a satire, and a feminist parable. The film is best seen knowing nothing about it, but it has achieved such notoriety that this is no longer possible for most viewers - anybody that's seen any of the DVD covers knows too much already, for instance.

The reason that ignorance is bliss is because the film is quite clever. For the first hour it pretends to be something that it is not... it pretends to be a romance. During this hour it actually works quite well as a romance - an aging widower organises an audition for a film, as a way to find candidates for romance. He finds one in an exceptionally attractive 24 year old lass. The relationship development is all quite interesting, and it could easily have been a nice romantic film... but it warns you a couple of occasions that things possibly aren't going to work out that way. The clues given are are not subtle, nor are they meant to be. Miike is telling you, and the main character, "It's not going to work out". You know it, and you know that he should know it too. But he doesn't.

Eventually the relationship reaches its natural conclusion, and naturally that's where the film turns. It quickly sinks into a nightmare, where time and reality become decidedly non-conventional. The climax of the film is not for the squeamish :-)

The film's message is essentially about the perils of objectifying or underestimating women. The idea that a wife is a commodity, such that candidates for the job can be effectively auditioned, is shown up for the chauvanistic attitude that it is. Historically, wifehood has been more like a job than a question of personal fulfilment for women in many cultures - AUDITION makes the case (somewhat obliquely) that they deserve a more equal footing in a relationship.

It's almost a shame that AUDITION got such widespread exposure in the West in the wake of Ringu, because its promotion as a "J-Horror" film (helped by all the promotional pics of Eihi Shiina with long black hair covering her face) means that a lot of people have failed to appreciate what a sophisticated work it actually is. The last 20 minutes or so of the film are all that people talk about, and to be fair they are quite memorable - but to divorce them from the overall context is to do the film and director Takashi Miike something of an injustice.