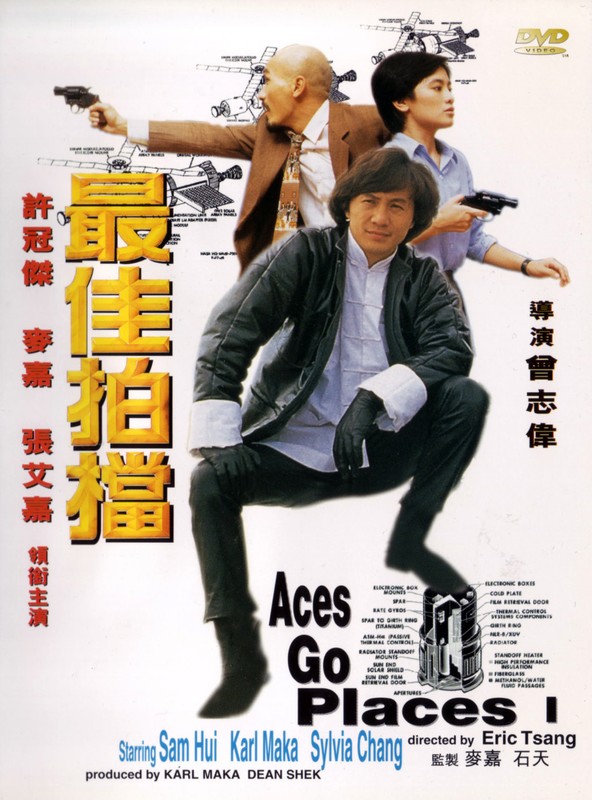 Top thief King Kong steals some diamonds from the Mafia and leaves behind a white glove to implicate renowned British thief White Glove, who then has to head to Hong Kong to recover the diamonds and clear his name. Hong Kong police call in bald US detective Kodojack to help them track White Glove down, partnering him with tough female superintendent Sylvia Chang.

ACES GO PLACES was the first big hit for Cinema City, the production company formed by Karl Maka and Dean Shek with Raymond Wong Pak-Ming. The pairing of Sam Hui as the suave super-thief King Kong and Karl Maka as the clownish detective Kodojack in a madcap mixture of action and comedy struck a chord with local audiences and established the template for much of Hong Kong cinema in the 1980's, ringing the death knell for the traditional martial arts films that had dominated the box office for so long.

The film swerves wildly between over the top action inspired by the James Bond films, slapstick pratfalls and goofy romance with little regard for narrative integrity - the plot really doesn't withstand much scrutiny, the film is really just a vehicle for the stars to do their thing. Much of it is extremely dated now, especially the comically low tech hi-tech devices King Kong uses and the idea that Dean Shek is funny.

The film's best weapon is Sylvia Chang as the foul tempered superintendent, though the idea that Karl Maka is able to "tame" her by treating her badly certainly wouldn't fly these days. She isn't quite an equal partner in the film, but she does mostly hold her own.

I've never been a big fan of the series, and they are only getting worse with age (and a spectacularly dreadful fake 5.1 mix on the Hong Kong bluray). The films may have been influential, but Sammo Hung and Jackie Chan took the idea of fusing action and comedy in a modern day setting and did it much better.