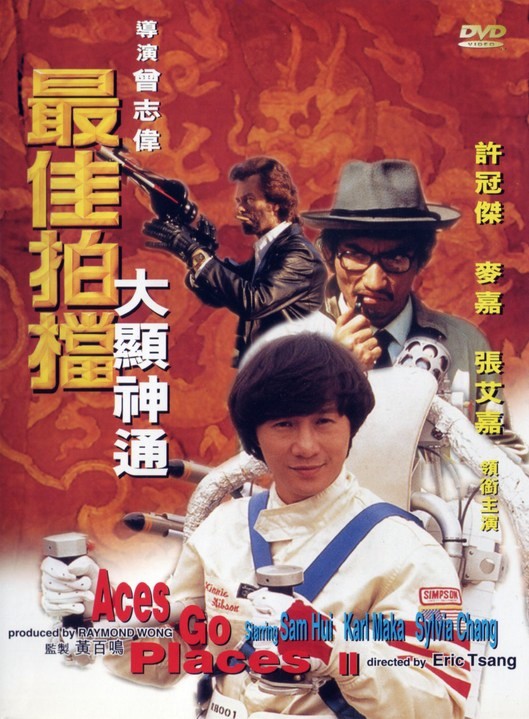 Super thief King Kong is ensnared by a femme fatale who exploits him to commit a robbery, so he ropes in Baldy (now resident in Hong Kong and engaged to be married to Nancy) to help clear his name. Meanwhile an assassin named Black Glove arrives from the US to avenge the death of his brother White Glove in the first film.

ACES GO PLACES II follows a similar template to the first film but goes bigger and harder and lands it much more successfully. The plot is largely inconsequential and the film doesn't pretend otherwise, it's just there to feed us a steady stream of gags and stunts and to let the leads do their thing. I went in expecting to find the jokes here as dated and dubious as I did with Aces Go Places yesterday but to my surprise I found myself laughing out loud a few times, and by the end I was totally swept up in the film's goofy energy.

The comedy is mostly of the Cantonese mo lei tau variety that Stephen Chiau would make his own in the next decade, largely revolving around Karl Maka being a clownish fool. It's dumb nonsense but the jokes seem to hit more reliably this time around, and a few are inspired.

The film also improves the quality of its action. Even more cars crash and explode for one reason or another, and there is a cool motorbike chase with some dangerous looking stunts. The fights aren't as plentiful or as impressive as you might hope with Lau Kar-Wing in the credits, but there is a big brawl in a nightclub that is hilariously over the top. The gadgets are very 1980's - remote controlled helicopters and robots plus James Bond style weaponised cars - it's a charming time capsule of what seemed like the highest of tech in 1983.

ACES GO PLACES II improves on the original in just about every respect, with the main exception being that Sylvia Chang isn't in it as much - though she kicks some ass when she does get some screen time. Yasuaki Kurata is also a little underused, he looks cool as hell but doesn't take part in the action at all for some reason.

Maybe it helped that my expectations were lower this time around, but I think this film has aged better than the first - it is very, very much a product of its time but it reflects some of the best parts of the early 1980's rather than some of its worst. It's much easier to see why the series was so loved by local audiences at the time here.