Directed by
5/10 - Lacks the chemistry of its predecessor 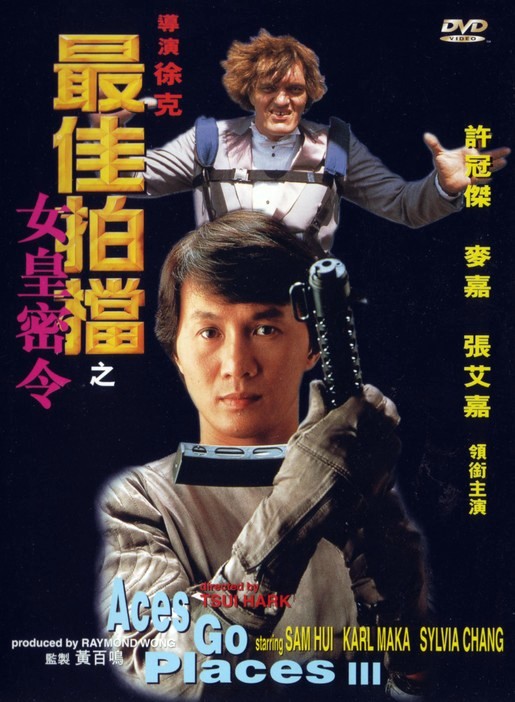 King Kong is recruited by a certain secret agent on Her Majesty's Secret Service for help recovering jewels stolen from the British Crown, which are currently in Hong Kong for some reason. King Kong is persuaded to agree by the addition of a beautiful assistant to the deal, but has to figure out a way to steal the jewels without his cop buddies Baldy and Nancy finding out he's thieving again.

The film leans even harder into the "James Bond imitator" identity this time around, with some pretty good look-a-likes for several Bond characters and actual Richard Kiel reprising his Jaws character - though nobody is ever identified by name, presumably because that might have required paying somebody a license fee.

The plot rarely makes much sense in the Aces Go Places series, and that continues to be true in the third film, which sees Tsui Hark promoted from random cameo appearance to director. Aces Go Places II succeeded by not even pretending the plot mattered except as a conveyor belt for gags and stunts, but while the story is probably even more stupid this time around the film spends more time trying to convince us it matters - to its detriment.

The three leads know what to do with their characters by this point and each gets to do it, but there are surprisingly few scenes with all three characters involved, which means the dynamic the trio have established doesn't get much opportunity to kick in. It's predictable what sort of situations the characters will find themselves in and how they will act, and it feels a little bit tired this time around.

Tsui Hark was hot off the heals of his masterpiece Zu: Warriors Of The Magic Mountain at this point, and the experience he gained in special effects there leads to a lot more digital/optical effects than in the previous films. These effects have not dated well and show their age a lot more than the practical effects of the other films, and unfortunately seem to have come at their expense. A Mad Max inspired car and motorbike chase that comes somewhat out of nowhere briefly calls to mind the insane vehicle stunts of parts 1 & 2, but it ends up being extremely tame in comparison - I don't think even one motorbike explodes!

There are moments of fun to be had here but it mostly feels like a regression, which is surprising given that it came from a director who was otherwise firing on all cylinders around this time, but it doesn't have either the manic energy or the warm heart of films like Peking Opera Blues. Perhaps Tsui felt misaligned with or too constrained by his bosses at Cinema City, as he founded his own production company Film Workshop for his next project (Shanghai Blues).

Knowing how much expectations influence an experience it's possible that I was more disappointed by this film because I enjoyed AGP2 so much a few days ago. If that theory is true then my now much lower expectations should lead to me enjoying the Ringo Lam directed Aces Go Places IV a whole lot more. Stay tuned to find out!