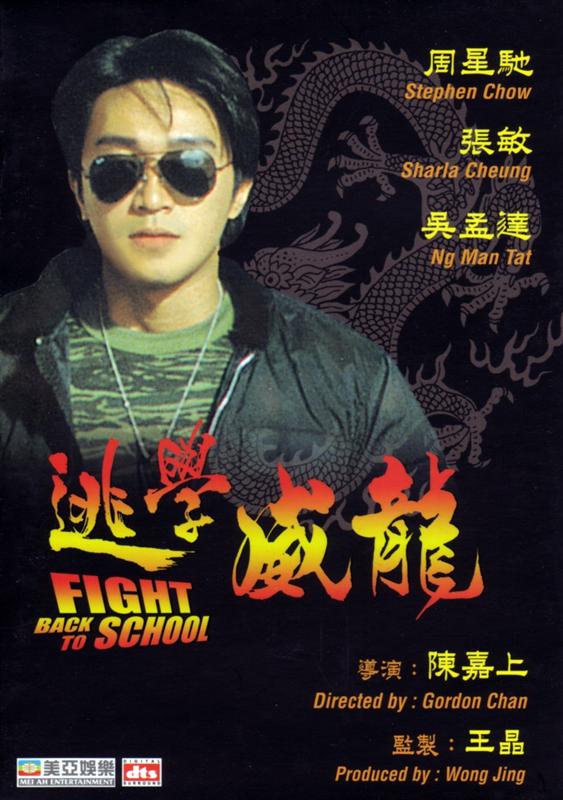 The chief of police's pistol goes missing during a visit from the local school, but as he is approaching retirement he doesn't want the scandal of losing his gun to be widely known - so he recruits boyish SDU member Chow Sing-Sing (Stephen Chiau) to go undercover as a student to recover the gun.

This aspect of the plot (i.e. the actual plot) is then promptly forgotten for about an hour, as Chow arrives at the school and rediscovers his hatred of studying. He is about to abandon the mission when he encounters sexy school teacher Miss Ho (Cheung Man) and decides it might be worth sticking around after all when she volunteers to be his tutor. He also becomes friends, very loosely, with the class geek (Gabriel Wong) and makes an enemy of the school bullies and their Triad Dai Lo (Roy Cheung).

1991 was a breakthrough year for Stephen Chiau - after putting in hard work as a B-list actor in the late 80's and appearing in a remarkable 11 films in 1990, the massive success of All For The Winner propelled him to star status, and he was suddenly in huge demand, and able to make films in his inimitable "mo lei tau" style. FIGHT BACK TO SCHOOL is a fine example of the melange of slapstick, action, romance, underdog story and fish out of water comedy that makes a "Stephen Chiau film" (rather than just being a film with Stephen Chiau in it). The influence of producer Wong Jing is also apparent, whilst director Gordon Chan imparts no detectable style of his own and was presumably in "director for hire" mode.

The plot is fluff, and they know it - which is why they ignore it for most of the film. It's really about giving Chiau a character he can embue with all the charisma he possesses and setting up scenes for him to show it off. Regular sidekick Ng Man-Tat is given a similar amount of free reign with his character, and as usual it is the interplay between Chiau and Ng that produces the film's best moments.

Cheung Man's role is little more than "flower vase", and Roy Cheung is not even remotely taxed as a tough triad. Gabriel Wong gets a bit more of a meaty role, or a geeky snivelling one at least, whilst Karel Wong has little to do except be manifestly inappropriate for Cheung Man but an obstacle Chiau must overcome none-the-less.

There's not a lot to say about the film, really - it's not deep, it's not particularly clever, it's just a vehicle for the comedy antics of Stephen Chiau and Ng Man-Tat. That particular formula was enough to make Stephen Chiau the most bankable star in Hong Kong for a decade or so though, so it's not like the film needed to do a lot more. It's fluff, but it's highly entertaining fluff that's not quite like anything else out there (except other Stephen Chiau films). Unless you're one of the few people who don't like Stephen Chiau films (I'm not sure I've ever met such a person), there's certainly no good reason not to watch it!