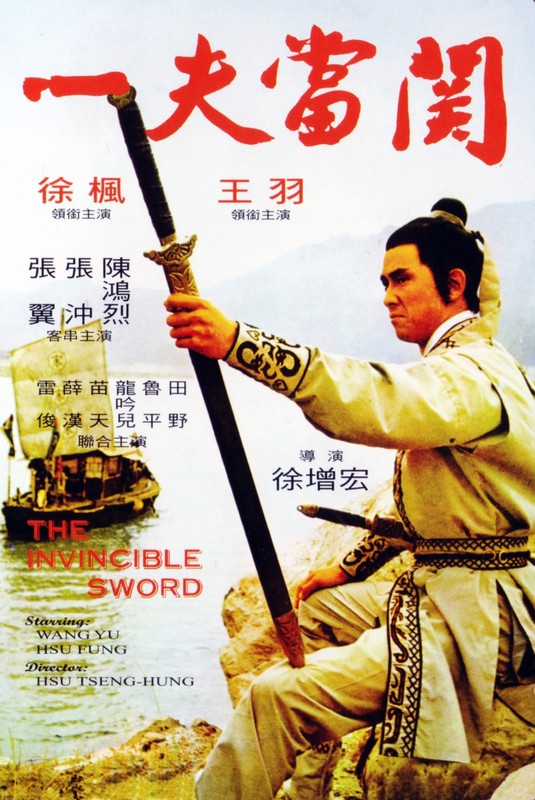 The righteous Sung Dynasty general Yueh Fei is captured and imprisoned by the corrupt minister Chin Kuei, so a group of loyal swordsmen attempt to rescue him. The rescue attempt does not go well, and hero Ling finds himself wounded and alone. A family of performing acrobats find him and resuscitate him, then help him to reunite with his compatriots for another rescue attempt... which also goes quite badly. If only that family of acrobats had some skills that might be of use in a general-rescuing mission...

THE INVINCIBLE SWORD is yet another tale of noble heroes, treacherous villains and sassy tightrope walking sisters, as were so many films at the time. OK, admittedly the acrobatic family was not exactly a standard genre trope, but other than that the film is little different from countless others made in Hong Kong and Taiwan in the late 1960's and early 1970's. Director Hsu Tseng-Hung can't really be accused of being a "me too!" contributor to the genre, though, since his 1965 film Temple Of The Red Lotus was one of the films that started that particular wave.

Still, with so many similar films to compete with, THE INVINCIBLE SWORD needed a bit more than Hsu Feng on a tightrope to justify its existence, and I can't really find anything else in the film to draw attention to or that sets it apart. Jimmy Wang Yu spends most of the film looking constipated, as usual, but does manage to rack up a pretty impressive body count by the end credits... the vast majority are dispatched with fairly tepid 'I swing my sword in your general direction' action though, and much of the slaughter takes place in scenes that are so dark on the Joy Sales DVD (and probably the original print) that it's mainly due to the sound effects that you know people are being massacred.

The film's main draw is probably Hsu Feng. She is terribly cute, has the best dramatic scenes and the most interesting fights.

It's not a bad film... the story is reasonably interesting, the acting no worse than many other films in the genre, and the action at least plentiful. If there weren't a hundred other films it could probably trade scenes with without anybody noticing, it would probably merit more of a recommendation than I can bring myself to give it now.