Directed by
Genre
A film of two halves... neither very good 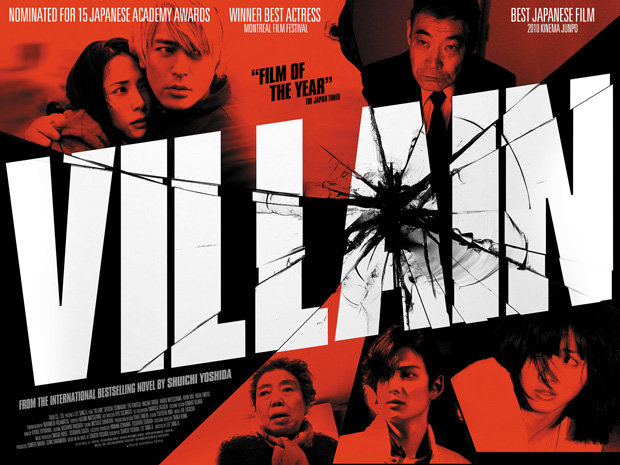 Yoshino (Hikari Mitsushima) is a beautiful girl with social ambitions. She meets Yuichi (Satoshi Tsumabuki) via an online dating site, but his blue collar credentials do not really fit her image of a suitable partner. She's happy to charge him money for sex, but when she bumps into playboy socialite Masuo (Masaki Okada) on the way to a date with Yuichi, she decides to follow the money. Yuichi follows the pair in his car... and the next day Yoshino is found dead. Who could be the villain? Meanwhile, Yoshino sets up a date with another girl who has contacted him via the dating site.

VILLAIN plays its cards close to its chest for about half of the running time... we might have our suspicions who the killer is, but exactly what happened is not revealed until the mid-point. In the meantime, the film follows Yoshino on his first date with the mild-mannered Mitsuyo (Eri Fukatsu), and shows us the family and social environment of all the players introduced so far. We are shown a world of alienation, of social disconnection... a lack of community and family in modern Japan leads to a dead emotional life and a loss of moral orientation for many of its members.

With his shock blonde hair and jazzed up sports car, Yuichi is a rather enigmatic character... we see little of his internal life, other than a suggestion that he is running on emotional empty. This all changes at the mid-point of the film, when it takes a somewhat unexpected direction... Yuichi opens up to Mitsuyo and she opens up to him, and the two of them admit to the loneliness and isolation they have felt all their lives. 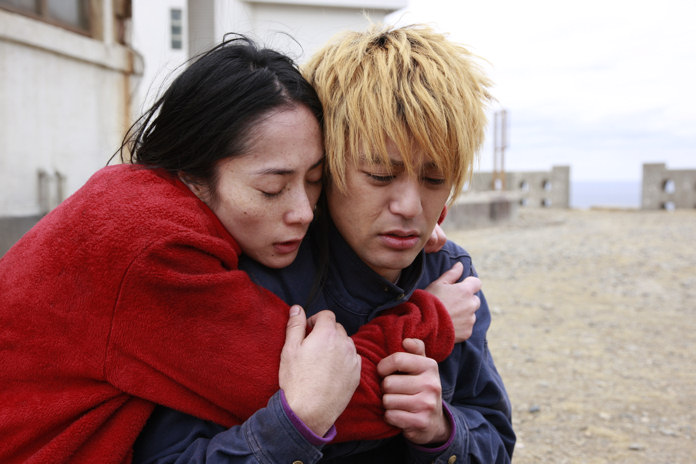 For a while, VILLAIN becomes a much more interesting film as it explores these characters' internal pain and its suppression by the deadening of emotion... but then it blows it by hammering its message home with a sledgehammer, culminating in a monologue where one of the characters basically spells out point by point what the director is trying to tell us, just in case the.increasingly crude symbolism and montage hadn't got through to us. Any subtlety is completely squandered at this point... and an attempt at a gotcha ending does not leave the viewer with questions to ponder, as was presumably intended, other than whether Lee Sang-Il had really thought through his message and themes as well as he thinks he has.

VILLAIN was apparently nominated for countless Japanese awards, winning several. This baffles me. The heavy-handed treatment of the subject matter and themes hardly screams of the sort of artistic inscrutability that critics tend to gush over, and the film is saddled with a technical mediocrity which gives it a cheap, direct to video feel.

It is perfectly possible to make a great film shooting on video with a low budget, as long as you have a little artistic talent and put some effort into things like lighting and camera placement. Even if your lack of financial resources means that your film is never going to look slick and polished, infusing it with sufficient creativity and distinctive character can easily overcome the technical restrictions. I don't think VILLAIN was a low budget film, but the pedestrian camerawork and editing, and the lack of any lighting or processing whatsoever (most of it is filmed in the dull natural light of winters days) makes it feel like an amateur production, or a TV movie at best.

The one bright spot on VILLAIN's credentials is the performance of Eri Fukatsu, whose character goes through a great range of emotions and shows a lot of vulnerability and depth. Satoshi Tsumabuki, on the other hand, might as well have been in a coma for the first half of the film for all the emotion he displays. This changes in the second half, but his performance still does not come close to the sort of memorability that an actually talented actor like Tadanobu Asano could have achieved.

What VILLAIN wants us to question is who is the real villain of the film... is it the murderer, or is it the society that produces him? How about both? Next question, please! This is hardly a new question to ask, though it is not one that has ever found an answer to everybody's satisfaction... but it has produced numerous artistic works that explore the issue with far more insight than Lee Sang-Il delivers. Is the real villain the gangster thugs who extort money out of an old lady and beat her when she is on the floor begging for mercy... or the society that produces them? False dichotomy, and frankly well past liberalism into the realm of apologism.

There are moments in the middle of VILLAIN that work well, and I found myself wondering if I'd been too hard on it up to then... but then it degenerates into preaching and all is lost once more.

Be warned that the trailer is seriously spoiler-filled!