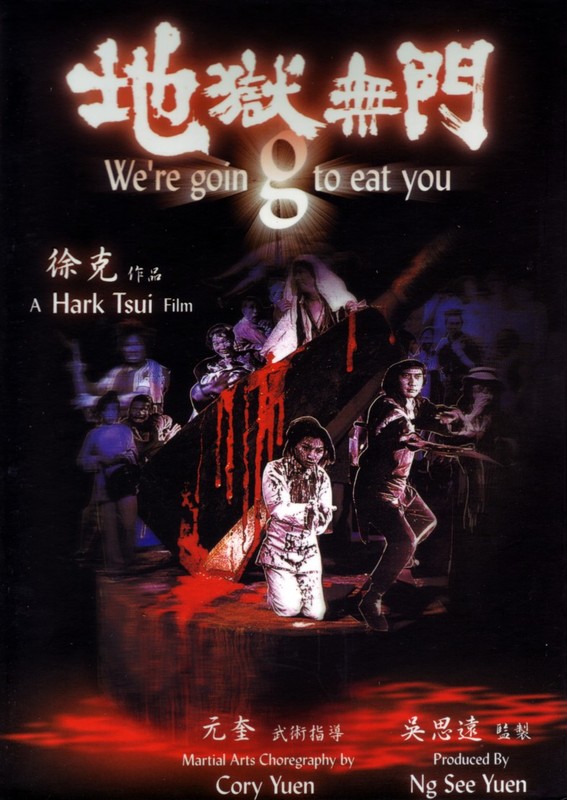 Tsui Hark's second movie as director is a Kung Fu Horror movie, laced with black humour and gleeful splatterhouse gore. Norman Tsui plays a kung fu cop on the trail of a bandit called "Rolex", who finds that the trail leads him to an island where the locals have unusual eating habits.

Tsui Hark is generally considered to be one of the major pioneers of Hong Kong's "New Wave" which started in the late 1970's and early 1980's, bringing fresh blood and cinematic techniques into the industry. WE'RE GOING TO EAT YOU has the feel of an experimental or indie film, a genre-crossover with action, horror and dark comedy (which occasionally passes into slapstick or satire). The camerawork is quite 'edgy' compared to the standards of the day, with some interesting choices of position and angle, and the look of the film is a huge contrast to the opulent Shaw Brothers productions - he seems to have assembled most of the freaks and misfits working in the industry at the time, dressed them in rags and shot them on location in an abandoned old village covered in grime and filfth.

The influence of American and European splatter films is quite apparent, with some quite gruesome gore that must have involved a couple of trips to the butcher's shop. People are dismembered and impaled with a palpable impression of Tsui Hark grinning wickededly behind the camera. Action is in fairly plentiful supply, with some occasionally imaginative and creative choreography, though it still feels a little too "old school" a lot of the time.

Norman Tsui does not deliver one of his best performances as Officer 999, with Eddie Ko dominating as the village chief whenever he is on screen, and Tsui even being upstaged by Hon Gwok-Choi (in a much larger role than I can remember seeing him in anywhere else).

The very early films of Tsui Hark definitely have the feel of a provocateur and iconoclast, innovating and experimenting with the medium. He matured very quickly, and within a few short years had definitely become one of the most influential figures in the industry, largely shaping its direction for much of the next decade (at least). If nothing else, WE'RE GOING TO EAT YOU is an interesting insight into his formative years.