Directed by
8/10 - Kurosawa's interpretation of Macbeth Lord Tsuzuki is thrown into panic when news of a rebellion arrives at Spiderweb Castle, with each report seeming to indicate that more of the lord's fortresses are being overrun by the invaders. Thankfully, news eventually arrives that two of his commanders - Washizu and Miki - have managed to turn the tide against their opponents, and ultimately they are victorious and the lord's lands are saved.

Tsuzuki invites Washizu and Miki to the castle to reward them, but they get lost in the forest on the way and run into a prophetic forest spirit. The spirit tells them that by the end of the day Washizu will be put in charge of the 4th Garrisson and Miki will be given the First Fortress in honour of their deeds - but that is not to be the end of their good luck. Washizu will one day be lord of Spiderweb Castle itself, and one day that same title will belong to Miki's son. The two men laugh about the absurdity of the prophecy, but when their reward turns out to be precisely the honours prophecied they are forced to take the spirit's further predictions seriously, along with the implied future conflict between the two men.

On hearing of the prophecy, Washizu's ambitious wife Asaji attempts to convince him that the predictions put him in mortal danger, should Miki tell the lord of it, and that he must strike first and claim the castle so that it may be fulfilled. Hoping to satisfy the prophecy without further conflict, Washizu plans to name Miki's son as his heir - but Asaji will not permit such a bloodless solution. Thus are the seeds of disaster sown. 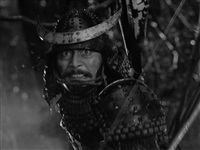 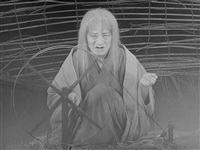 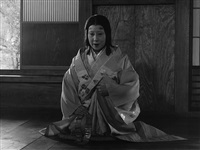 THRONE OF BLOOD is Kurosawa's interpretation of Shakespeare's Macbeth - I must claim some shame points and admit to never having read the original in full, though I think everybody is familiar enough with the story to recognise at least the outline in Kurosawa's script. In keeping with the origins of the story, Kurosawa adopts a rather theatrical style for the film - specifically borrowing the forms and traditions of Japanese Noh theatre, apparently. Rather like his other Shakespeare interpretation, Ran (Chaos), the tragedy and morality play aspects of the film are played up - the message is loud and clear: greed, ambition and women will bring about the downfall of a man every time!

Kurosawa turns once again to Toshiro Mifune to play the lead role - Washizu/Macbeth - and Mifune once more rises to the occasion with a commanding and powerful performance. At the start of the film he is all confidence and authority, with weakness and temptation creeping in under the influence of his own Lady Macbeth, wife Asaji (Isuzu Yamada), and guilt, terror, arrogance and hubris rising to the front as he attempts to assert control over his destiny but increasingly becomes the source of his own downfall. Isuzu Yamada almost steals the show as his ambitious, slippery-tongued wife who eventually succumbs to guilt and madness when the consequences of her treacherous influence become apparent.

As is to be expected, the visuals are consistently superb in the film, with the grandiose castle exterior apparently having been built specially for the film on the slopes of Mount Fuji, because it had the kind of soil that Kurosawa wanted - a deep black, volcanic soil. Fuji's natural inclinations perhaps inspired a persistent presence of fog in the film, which is used very effectively to create a claustrophobic atmosphere, with the promise of peril lurking just out of sight. 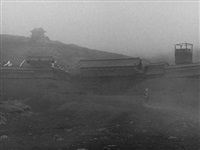 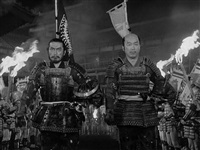 Kurosawa's often cynical view of the common man's trustworthiness is usually tempered by an agent who shows man's potential for nobility and honour, and in this case Miki (Akira Kubo) fills that role. Despite his own ambitions for his son and even whilst strongly suspecting Washizu's treachery, he endeavours at every stage to seek a solution which brings about the least harm to the people - though he is persistently thwarted in his attempts to broker peace. His son is implied to have inherited his nobility though, and in the end the implication is that the prophecy's final part is likely to come to fruition sooner rather than later, which implies a benevolent ruler for the land. I'm not sure if this is the case with Shakespeare's original too, but it is certainly in keeping with Kurosawa's wider body of work (at least, those films where he doesn't succumb to utter despair at the folly of the human race).

There's not really anything to fault in THRONE OF BLOOD - it shows Kurosawa's usual mastery of the craft of film-making, and the magnificent charisma of Toshiro Mifune. It is perhaps just the familiarity of the story that robs it of the impact of Kurosawa's more classic works - pretty much every western viewers knows at least the outline of the story going into the film, so it's just a question of seeing how Kurosawa delivers it. Whether this would have been an issue for Japanese audiences in 1957 is hard for me to say, but I imagine Shakespeare's most celebrated work was fairly well known there too. It's certainly a film worth seeing, but for me at least it doesn't have the "wow" factor or the urge to yell "you must see this!" at random passers by of Rashomon or Seven Samurai, for instance. That doesn't make it a bad film, and in any filmography except Akira Kurosawa's it would undoubtedly stand out more prominently.