Directed by
10/10 - Contains the best single scene in cinematic history! A mad scientist is kidnapping children to steal their dreams, because his genetic engineering left him without any of his own. His companions include a matronly midget, a group of simpleton clones and a brain in a fish tank. A pair of spinster siamese twins run a gang of pickpocket orphans in the city's docklands. A slow, simple circus strongman adopts an orphan as his 'little brother', and when 'petite frere' is kidnapped he teams up with an altogether too grown up little girl to investigate the cult of cybernetic cyclops that took him.

In other words, CITY OF LOST CHILDREN is kind of weird! Or, from another perspective, CITY OF LOST CHILDREN is a dazzlingly original and creative piece of cinema. The film was the second feature length collaboration between Jean-Pierre Jeunet and Marc Caro, a dark fantasy with spectacular production design and art direction, and special effects that were groundbreaking and quite remarkable for the time, wedded to a strange, creepy yet ultimately touching tale about a bunch of freaks and misfits, and a LEON-esque relationship between a child-man and a woman-girl. The story is simple at heart, but rich in details and deftly woven together. 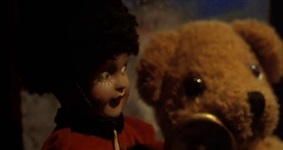 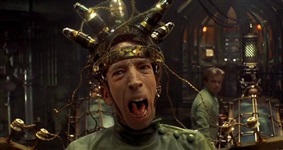 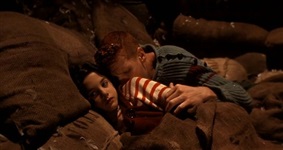 The world that Jeunet and Caro create is fantastically original, an amalgamation of sinister Grimm-esque fairy tale fantasy and steampunk sci-fi, realised through some of the most impressive sets (both real and virtual) of the 1990's (or the pre-LORD OF THE RINGS world in general). Both directors are excellent visual stylists, and they really let their imagination run wild in this film. There is some fantastic visual story telling, including what may be the single greatest scene in the history of cinema ('tear drop' - though 'mouse' is a contender too!). Marc Caro's production design and Jean-Paul Gaultier's costumes are wonderfully deranged, with beautiful props and costumes drawn from Victorian era circus carnivals and urban docklands twisted and enlivened by imaginative technology based around valves and clockwork - a unique look, whose future influence is most strongly felt in the videogame BIOSHOCK. The CGI in the film was really ahead of anything that had been seen in a feature length film before, as far as I can recall, but is used quite subtly so that its prevalence and technical accomplishment might not be readily apparent to viewers without some familiarity with the technology behind it. Even now, 18 years later, the special effects are only just starting to look a bit dated. 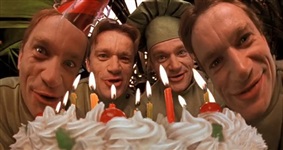 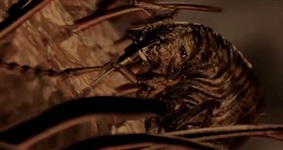 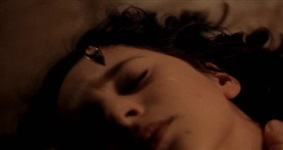 The visual wizardry alone would be enough to make CITY OF LOST CHILDREN noteworthy, but it's coupled to a genuinely strong narrative and some very memorable characters. Ron Perlman's gentle giant One, Daniel Emilfork's sinister but pitiful dream stealer, the neurologically conjoined Octopus Twins, the sentimental flea circus owner... even the brain in a tank are all great characters, but most especially all the Pinons are wonderful! Even the kids in the film are good, with little Miette showing a maturity well in excess of her years, and the simple innocence of 'little brother' providing an amusing contrast.

I'm surprised that CITY OF LOST CHILDREN and its creators aren't better known than it is... 5 years later AMELIE should have propelled Jean-Pierre Jeunet to international stardom (let nobody ever, ever mention the film that he was allegedly involved with in the intervening period!), but it was Audrey Tatou that got all the attention - whilst Marc Caro wouldn't direct another feature film for 14 years. It is often lamented that the two of them haven't worked together again since this film, since they seemed to have a very synergistic vision. It certainly took a bold pair of film makers to conceive of a film like CITY OF LOST CHILDREN, let alone have the balls to actually believe they could make it. AMELIE was a great film too, but nothing either of them have done alone has come close to the sheer dazzling artistry of their two films together.

Perhaps after creating something as remarkable as CITY OF LOST CHILDREN any collaboration would be faced with the impossibility of going one better for the follow up, so they decided to end on a high note!