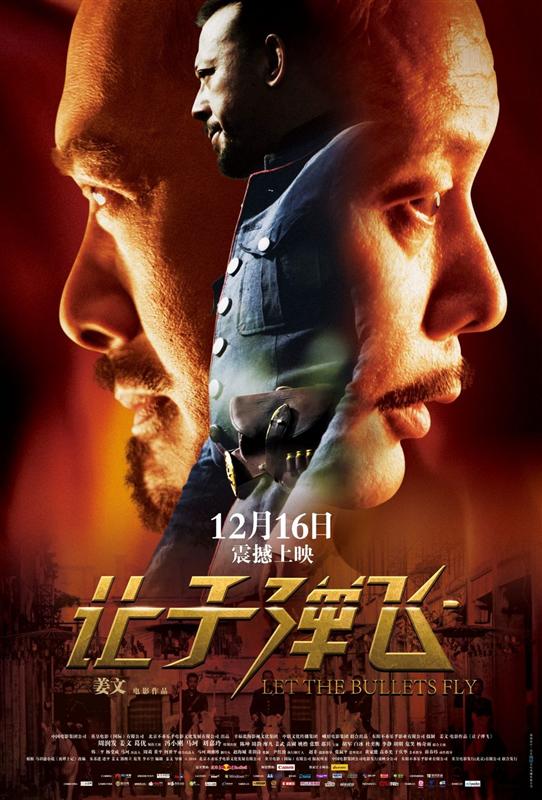 Notorious bandit Pock-Faced Zhang (Jiang Wen) robs the train which is carrying a new governor to Goose Town, killing the governor in the process, but then learning from his advisor that there is no money on the train, because it was all spent buying the governorship. Zhang decides on a plan - taking the advisor and the governor's wife along, he decides to pose as the new governor of Goose Town himself, since it was apparently judged to be a profitable enough position to be worth buying. On arrival, he discovers that Goose Town is under the thumb of local crime lord Boss Huang (Chow Yun-Fat), and that previous governors of the town have not tended to last very long. Huang's men provoke Zhang by framing his adopted son for a crime, which leads the two men into a battle of wits and nerves to see who will be the real boss of Goose Town.

Jiang Wen's 1920's set action-comedy is a clever and wonderfully crafted tale of schemings, rivalries and double identities - a cat and mouse game inspired by stories of military strategy and rivalry such as THE BANQUET AT HONGMEN. Jiang Wen and Chow Yun-Fat's conflict plays out like a game of chess played at the highest levels, as the two men manoeuvre and manipulate, feint and bluff, challenge and provoke. Meanwhile, the advisor (Ge You) - who is really the governor that Zhang is impersonating - has his own plans and schemes.

LET THE BULLETS FLY is also hilariously funny, featuring a mix of slapstick action and cartoonish silliness with more subtle satire and wit. Jiang Wen excels both in front of the camera and behind it, creating a memorable character in Pock-Faced Zhang and directing the film with flair and style. Chow Yun-Fat is even more fantastic in his role(s) - he plays both Boss Huang and his body double, the former a cool, cunning and fierce career criminal and the latter a simpleton - and clearly relishes the opportunities both roles provide for him. He seems to be having a fantastic time being allowed to just cut loose his acting skills and play up to his full, charismatic ability. He drops little bits of English into his dialogue, perhaps to prove that all the time spent learning the language during his long and largely unsuccessful self-imposed exile in Hollywood wasn't completely wasted, despite the few opportunities he got to use it. His Mandarin has clearly improved since Crouching Tiger, Hidden Dragon too, and is probably proving much more useful to his career.

Carina Lau also had a bit of a comeback year in 2010, and she is a welcome addition to the cast of the film even though her character does not get all that much screen time. The rest of the cast are all mainlanders, and apart from Ge You I can't say I recognised them, but all are good in their parts.

The film is less ballistic than might be expected from the title, which is in fact a reference to the foresight and planning of Zhang - even when he fires a gun it takes some time for his plans to achieve fruition... the bullets have to be given a chance to fly first. When the action does come it is suitably furious and exciting though.

Cinematography is first-rate throughout, with a sharp, crisp and colourful visuals. The film is a top drawer production all around - a rare combination of entertaining action and comedy that doesn't compromise on the intelligence of the writing and calibre of the acting. Mainland cinema has come a long way, and films like LET THE BULLETS FLY ought to give Hollywood pause, as if China is ever able to break the big studios' stranglehold on marketing and distribution channels I really can't think of a good reason why films like this and the somewhat similar Korean film THE GOOD, THE BAD & THE WEIRD couldn't get audiences back into cinemas worldwide.