Directed by
Genre
Possibly the most outrageous film ever made? 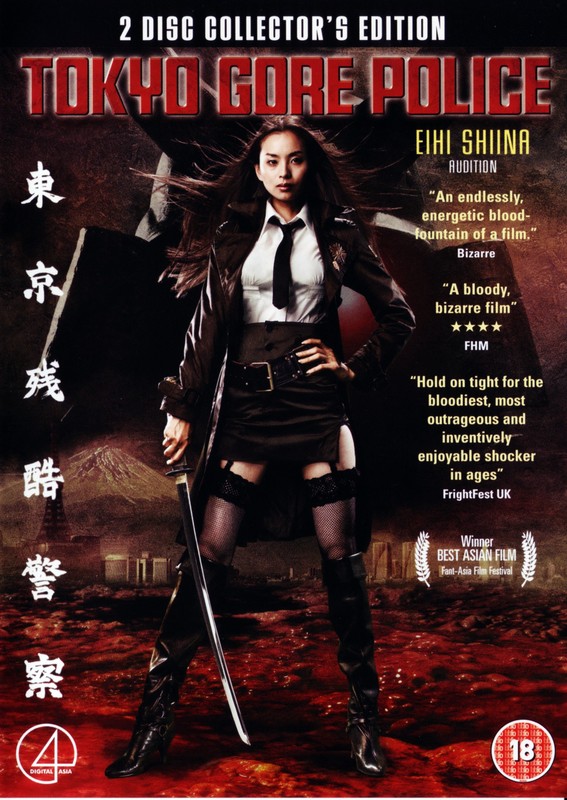 It's the near future, and the Tokyo police force has been privatised, leading to a rather fascistic approach to law enforcement. The police find themselves threatened by a new type of enemy - The Engineers, a mysterious breed of human-looking beings who are very hard to kill, and whose most distinguishing characteristic is that whenever they are wounded a deadly weapon grows in the place of whatever body part is lost. Eihi Shiina plays Ruka, a police Engineer Hunter... a trained killer whose skill with a sword and ruthless approach to making it fatal is about the only thing sufficient to take down an Engineer.

TOKYO GORE POLICE was the directorial debut of Yoshihoro Nishimura, the special effects wizard responsible for the pioneering gore effects in films like The Machine Girl and Suicide Circle. It's no surprise that it is a gory film. A really gory film. I do not think it is possible to overstate quite how violent, twisted and grotesque the film is - gore is its reason for existence, and Nishimura is clearly determined to deliver. He perhaps took the role of director in order to create an outlet for those ideas of his which were judged to be too extreme even by pretty damn permissive directors like Sion Sono and Noboru Iguchi.

The film is also quite ridiculous, though it definitely has a darker feel than THE MACHINE GIRL, with an edge of depravity and perversion that - and this might surprise those who have seen them - Noboru Iguchi's films lack, for instance. There is a sexual element to the film at times, which is not particularly uncommon in Japanese films, but which does make the grotesqueries on display a little more difficult to simply laugh at as harmlessly over the top excess.

Eihi Shiina is no stranger to excess, having been largely responsible for introducing the Western world to Japan's penchant for it via Takashi Miike's Audition. She manages to travel through the deranged world of TOKYO GORE POLICE almost completely impassively, registering very little emotion from start to finish. I can't really decide if this is because that's what her character was supposed to be like, or because she is an awful actress. Perhaps a little of both.

There's not a lot more to say about the film... there is a plot in there, though you could be forgiven for completely missing it. Mostly it's an exercise in extremes of creative, twisted, imaginative violence and gore (on a budget). If that's your cup of tea, I guess TGP would have to count as a must-see!