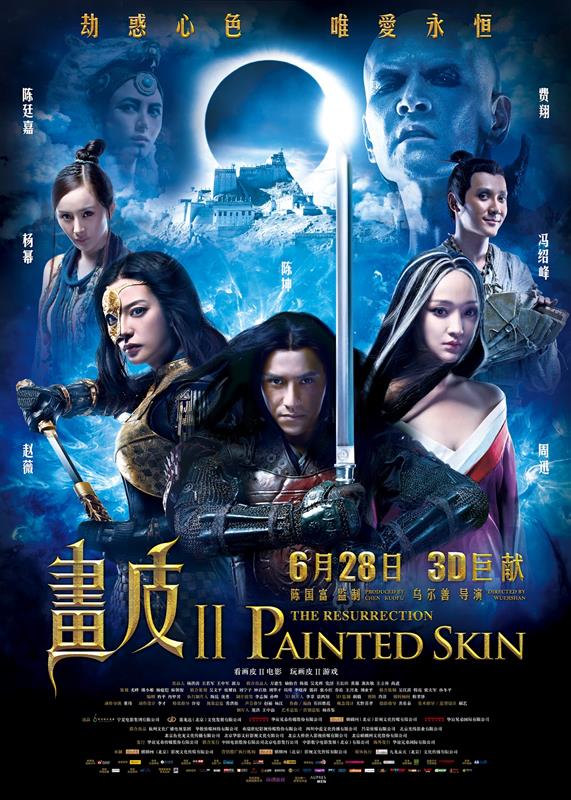 I don't remember too much about Painted Skin 2008, except that it clearly wanted to channel a THE BRIDE WITH WHITE HAIR vibe, and that that is no bad thing. I don't think it left itself especially wanting a sequel, but it gets one anyway.

Fox Demon Xiaowei (Zhou Xun) is released from a 500 year sentence of frozen torture by a helpful bird demon, and re-embarks on her mission to become human, as Fox Spirits (and Snake Spirits) are ever wont to do. For this transformation to be possible she needs to acquire a human heart - the tricky part being that it must be given freely. An encounter with a warrior princess (Zhao Wei) harbouring a wound more emotional than physical provides her with an opportunity and a plan.

Whilst The Bride With White Hair 2 was a misfire that mistook surface details of the original for the qualities which made it successful (primarily aesthetic, atmospheric and tonal), PAINTED SKIN: THE RESURRECTION clearly appreciates full well the opulent visuals, gothic tonality, strong femininity and charged eroticism that made TBBWH worthy of emulation in 2008 and recapitulation in 2012. PS:TR delivers all these qualities, coupled to the level of polish and special effects that a modern Mainland Chinese production can bring to them.

Zhou Xun's otherworldly beauty makes her ideal for the role of a tragic, tempting Fox Spirit, and the fact that she can actually act is an added bonus. Zhao Wei is stretched a little harder by her role, and doesn't bring quite the same level of conviction to her performance, but it's certainly at least adequate. Adequate is probably the best the male leads can manage, too, but they're not particularly important anyway. One weak link is the Caucasian-looking villain, who hams up his role to a degree beyond even what might have been appropriate.

I am probably not the most critical reviewer when it comes to period fantasy - I don't ask for a lot except that it looks stunning, has some kind of a story and preferably a few strategically placed sequences of elegant and graceful wire-enhanced combat. PS:TR certainly meets my standards, especially the aesthetic ones... it looks absolutely great throughout. The story is sufficiently tragic/melodramatic to make the extravagant visuals seem appropriate, and once it plays its hand and all the different elements fall into place it's not a bad tale at all. There's arguably two films worth of material in there... around about the 90 minute mark things seem to tie themselves up quite nicely, and the film could quite easily have ended there - I was ready for the credits to roll. It turns out there's another 30 minutes or so to go though, which could have been spun off into a third film in the series - though that might have been stretching the material a bit too thin.

I was first drawn to Hong Kong Cinema by the extravagantly beautiful fantasies and wu xia films such as A Chinese Ghost Story and Swordsman II, and whilst recent Mainland films such as this lose something of the manic creativity of Tsui Hark and Ching Siu-Tung's pioneering work in their increased budgets, the better ones do manage to deliver something of their eye-crack spectacle and wonder. Whilst experience has taught me that not everybody shares my passion for this sort of film-making, with its complete divorce from any grounding in reality or realism, I know that there are others who do react just as positively as I do. For those people, then, if not necessarily the rest of the world, PAINTED SKIN: THE RESURRECTION comes recommended.