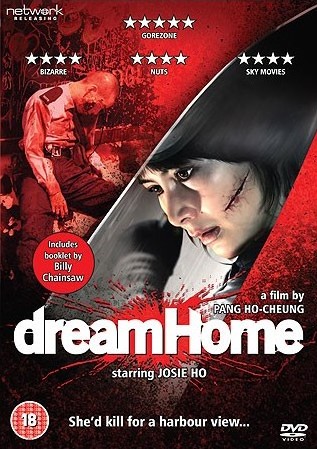 Cheng Lai-Sheung (Josie Ho) grew up in Hong Kong during the property boom of the 1980's, when property developers were not at all averse to using violence and intimidation to get people out of their family homes so that prime real estate could be redeveloped. In 2007 she wants nothing more than to get her own place, with a harbour view like the one she used to enjoy when she was young - but with property prices rising at double digit rates every year and salaries stagnating, getting her dream home could be costly. What price might she be willing to pay?

Pang Ho-Cheung's DREAM HOME is an odd beast. At heart it's a black comedy, a satire of Hong Kong's love affair with capitalism and materialism - but it's also one of the most bloody, extreme slasher films the territory has ever produced. Whilst there have been some deeply deviant films under the Category III rating in the past (e.g. UNTOLD STORY), DREAM HOME is unusual in that the killer whose crimes we follow is not some depraved, sociopath misfit - she's just a girl with a dream! That she manages to maintain our sympathy whilst delivering some of the most horrific screen deaths I can remember witnessing is impressive. It's not just the level of gore involved, although there is more than enough to be shocking - the deaths are also emotionally horrific... protracted, tortuous, and full of terror and confusion. It could easily have been quite a dark, disturbing film, but it always manages to keep a cheeky little grin on its face and maintain the credentials of a 'black comedy'. Ever so black!

The film is at times reminiscent of Japanese splatter such as The Machine Girl, but whilst Noboru Iguchi's films are just silly over the top fun, with little depth under their surface, DREAM HOME also functions as a satire of the property market - Josie Ho's killing spree is effectively set against a backdrop of the quiet endurance of deprivation that those around her endure - the ones that aren't willing to sacrifice others for their own financial gain. The implication is that her day job as a telesales agent for a bank's predatory lending department has conditioned her for her blood-soaked night time ventures. Morally, perhaps the two activities are not so far apart?

Josie Ho shows an impressive amount of nerve in the film - not only for taking on such a contentious lead role, but for producing and releasing it via the production company she set up with husband Conrad Chan. In an interview she says that Pang brought the script to her but worried it might be a bit too extreme... her response was that since it was going to be controversial there was no point neutering it by worrying about people's sensibilities, but instead they should go in the opposite direction and try to "push as many buttons" as they could. All credit to them for delivering a highly button-pushing film!

It's great to see Pang back in comedy territory, since he is one of the funniest writers in Hong Kong when he shoots for it. I'm kicking myself for waiting so long to see DREAM HOME - it has definitely ensured that I won't be as tardy in catching up with the rest of his films that I have yet to see.