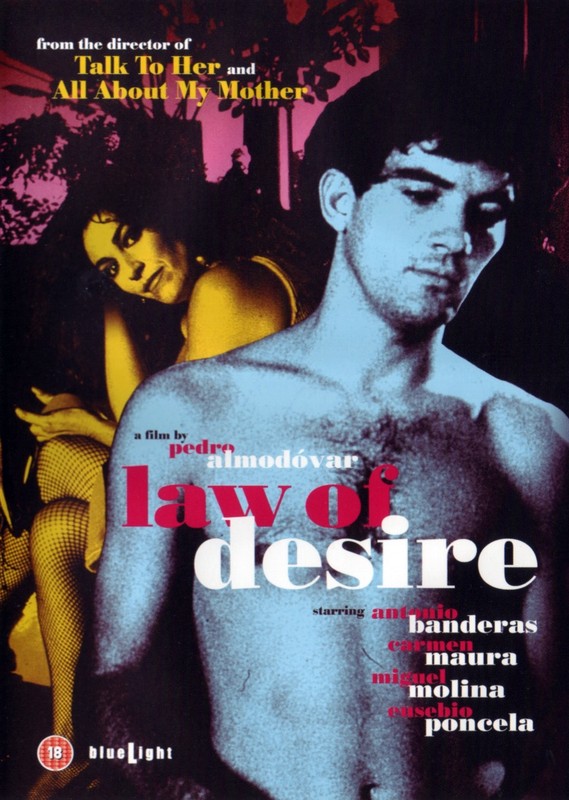 Pablo is a film maker who has achieved reasonable success, and who lives a relatively carefree life of hedonism, marred only by the fact that the young boy he is in love with does not reciprocate to quite the degree he would like. When the boy leaves town, Pablo meets Antonio (Antonio Banderas) and takes him home for a one night stand - not realising that Antonio has been stalking Pablo for some time, and harbours a deep obsession for him. Carmen Maura plays Pablo's sister Tina, a character with her own troubles and a dark past.

LAW OF DESIRE features Almodóvar in full melodrama mode, with a story of obsession, lust, murder, incest, amnesia, Catholicism, drugs, and all the other fine things that Madrid had to offer a liberally minded man in the 1980's. It's quite candid in its depiction of gay sex and drug usage, and quite irreverent in its treatment of church, family, the police and... well, most other things.

Pablo's asymmetrically obsessive relationships provide the backbone of the narrative, but relatively little of the meat. The dynamics are arguably more interesting between Pablo, his sister, and the precocious little girl who seems to follow her everywhere. Plot developments take a turn for the soap opera towards the end before an explosive finale (somewhat literally).

Rewatching this towards the end of an Almodóvar retrospective I can better appreciate how accomplished it is, distilling the themes that run through his work into one of his most labyrinthine narratives and executed with undeniable audacity and flair.

Fun detail, the main character Pablo puts on an interpretation of Jean Cocteau's play THE HUMAN VOICE, which Almodóvar himself turned into a film last year.