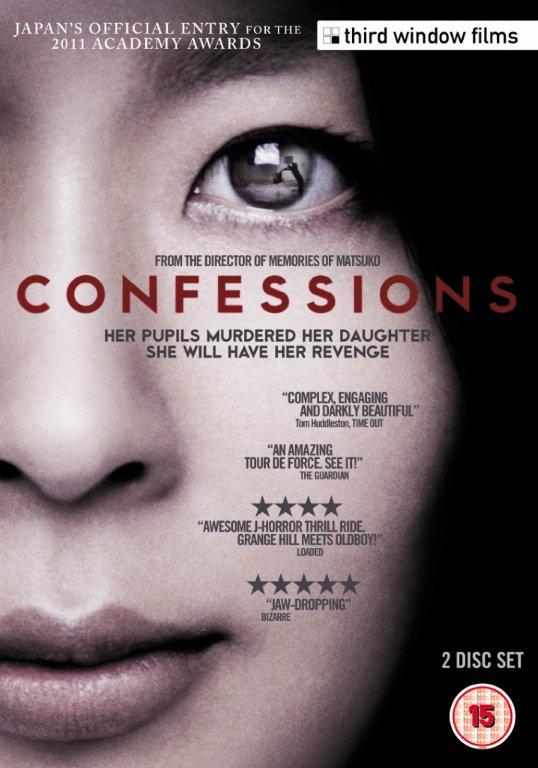 At the end of term, a teacher announces to her middle school class that she is leaving the profession, and that she wants to share a confession with them before she goes. Her confession implicates two of the pupils in the class in a serious crime, and the consequences of her confession last long after she leaves. A series of further confessions slowly reveals the layers of a story that is by turns shocking, horrific and tragic - a story that penetrates right to the darkest depths of the human heart.

CONFESSIONS is really quite a remarkable film - the first part of the film, teacher Moriguchi's confession, is a powerful story in its own right, and I wouldn't have been disappointed if that had turned out to be the entire film... but it is truly only the beginning. The film is beautifully shot with a keen sense of style and confidence and a perfectly chosen soundtrack, a glossy layer much like the sugar coating on the bitterest of pills.

I was slow in picking CONFESSIONS up despite positive reviews and awards (including an Oscar nomination), perhaps because of awkward attempts to shoehorn it into the J-Horror/Revenge Shocker category in the UK (like so many Asian films), which really doesn't do justice to a complex and thematically rich work. The film is shocking and in some ways horrific, but mainly in its ideas rather than any explicit violence. Despite shades of Park Chan-Wook it actually plays something like a cross between Rashomon and Battle Royale, which clearly ought to be impossible. Stylistically it is perhaps closest to a Toshiaki Toyoda film.

Although chilling in its subject matter, the film manages to feel quite authentic and 'real'... at least for the first 90 minutes, anyway. I was disappointed with the ending, which loses some of the thoughtfulness and restraint that had led up to it, but I'm not going to dock a point off the rating because it at least compensates us with an awesome piece of shoegazer noise and the best unexplosion ever.

CONFESSIONS is definitely the most powerful and impressive film I've seen in quite a while - and perhaps not coincidentally the first Japanese film I've watched in a couple of months. Well deserving of an Oscar, even though it was clearly never going to actually win one!