Directed by
Genre
The PARASITE of zombie films 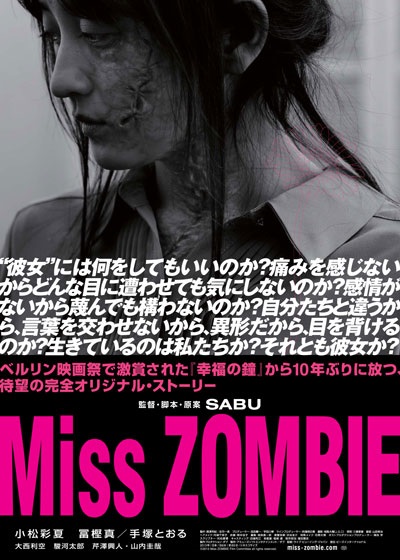 A rich family purchase a zombie to work as a housemaid, receiving assurance that she is a very docile low-level zombie, more human than zombie really. The zombie silently and slowly gets to work scrubbing the floor, walking home each night to the storage facility the family have set aside for her to use as a home. The groundskeepers note that in a certain light she's actually quite an attractive zombie, which hasn't escaped the notice of the paterfamilias either.

MISS ZOMBIE is a very different kind of zombie film to the sort you're likely to be familiar with, it's zombie film rendered as arthouse cinema in high contrast black and white. It's another unpredictable swerve for Sabu, as different from his previous film Usagi Drop as it is from his earlier comedies like Drive.

All zombie films are on some level about class anxiety, the fear of the ruling classes that the proletariat will rise up and overthrow the natural order of things (as it seems from their point of view). MISS ZOMBIE is an overt critique of capitalism, where the ruling classes must of necessity see the working classes as something less than human to justify their own privilege. It is, perhaps, the PARASITE of zombie films - whilst somehow also being the DANCER IN THE DARK of zombie films at the same time (not a musical though).

I don't know if MISS ZOMBIE can really be classed as a horror film, but it is infused with a palpable atmosphere of dread terror. In most zombie films the zombies are at least nominally the bad guys, but Miss Zombie is very much the victim here. Her silent endurance speaks volumes despite her apparent inability to feel anything, pleasure or pain. It's a terrific performance from Ayaka Komatsu, who creates a fully realised character with the barest of toolboxes.

Sabu's direction is sparse and economical but also as assured and effective as he's ever been, letting the camera to do most of the talking. Daisuke Soma's cinematography is very striking, using light and shadow to great effect, as only a monochrome film truly can.

Japan has produced some of the most idiosyncratic zombie films, from the low key and light hearted TOKYO ZOMBIE to the insane and obscene Zombie Ass: Toilet Of The Dead and the action masterclass that is Versus. As far as I can recall it's managed to steer clear of doing the tired zombie horde type of film, though I dare say there must have been some.

MISS ZOMBIE stretches the zombie concept further than ever, and is a compelling film I wouldn't hesitate to recommend to anybody.