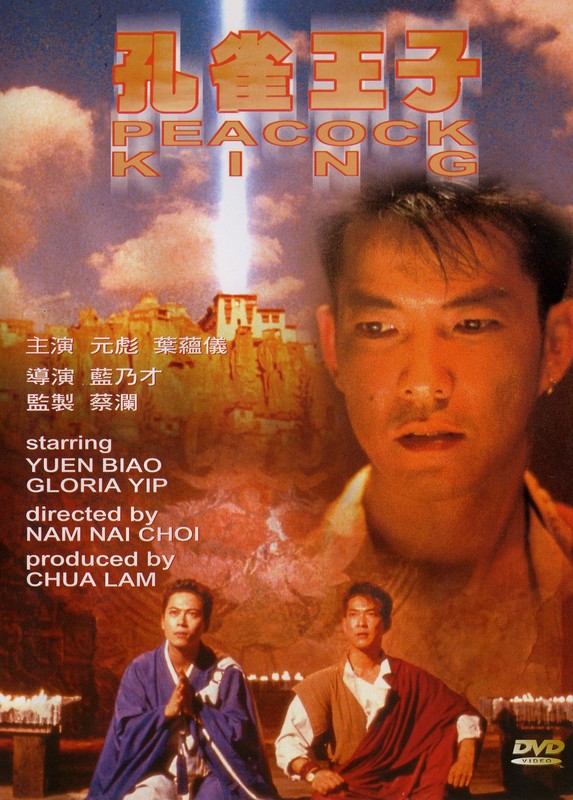 A group of archaeologists at a dig site unwittingly unleash Hell's Agent Raga (Pauline Wong), who promptly summons up Hell Virgin Ashura (Gloria Yip), whose power can open the 4 gates of hell and bring the King Of Hell back to earth to rule/oppress mankind. Two monks, one from Japan (Mikami Hiroshi) and one from Tibet (Yuen Biao) set off to Tokyo to see if they can save the world. Then, err... a bunch of mad shit happens.

PEACOCK KING is the only film in which Yuen Biao fights both Gordon Liu and a dinosaur, and therefore ought technically to be the greatest film ever made... but for some reason it isn't. It certainly isn't the fault of the special effects, which are spectacular (for the time - helps if you like miniatures and stop-motion), nor the production values in general. I think Yuen Biao probably nailed it in an interview... "It's a kid's film that's too scary for children ... people who can think probably won't like it" (or words to that effect).

The plot is not very compelling, or coherent (not that the two are necessarily correlated), which I suppose is the main problem. Although tons of stuff happens in a visual sense, storywise there's really not a lot there. The actor who plays the Japanese monk is rather lifeless (Yuen Biao gloats that the Japanese producers wanted the Japanese actor to be the main star, but most of his scenes got edited out because Yuen Biao's performance was much more compelling). The Japanese actress who tags along with the monks for much of the film is also a bit pointless. Gloria Yip is pleasantly cute in her film debut (which made her a star in Japan), but doesn't really have a lot to do. Gordon Liu and Eddy Ko both provide a welcome gravitas but neither is in the film too much.

So, I guess there are sufficient reasons why the film doesn't work as well as it might have done... but the special effects and production design are truly excellent, and Yuen Biao fights a f**king dinosaur so it is surely worth a watch.