Directed by
5/10 - Uneven and ultimately a bit unsatisfying 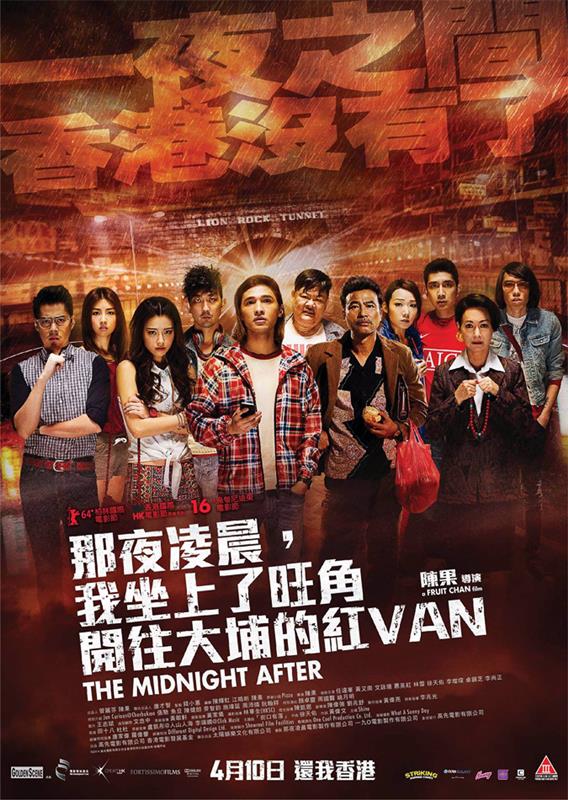 A group of strangers end up on a late night bus to Tai Po for various reasons, but after passing through Lion Rock tunnel they find that the streets are suddenly strangely empty. Nobody answers their phone calls - not even the police - and they eventually discover that no news websites have been updated since around about the time they were in the tunnel. After exchanging numbers they head to their homes to look for family and friends, but in the morning they regroup in a restaurant to try and figure out what has happened.

I must confess I have never been a big Fruit Chan fan, and have in fact only seen a couple of his earlier films, of which DUMPLINGS was the only one I particularly enjoyed. Hence, I don't really have much of a handle on what a Fruit Chan film ought to be, or why he is so highly regarded (in some circles), so it's hard for me to judge whether THE MIDNIGHT AFTER is a typical Fruit Chan film or if it will satisfy his fans. It's certainly far weirder than I expected... very weird indeed, in fact.

What begins as a mysterious apocalypse thriller quite quickly gets sidetracked into a character study, with each of the strangers revealing something of their histories and their personalities. They are a conspicuously disparate bunch... which I suppose is possibly going to be true of any randomly assembled bus full of people. As the film unfolds it also mutates in style and tone, even genre, with moments of creepy horror seguing into sections of black comedy, occasionally drifting into surrealism and bordering on farce that might suddenly slam into a social or political diatribe. It's a rather chaotic approach to film making, and one which is not uniformly successful.

The acting in the film is almost universally bad, even from normally reliable veterans Simon Yam and Lam Suet, so I assume we have to blame the director for that. There are quite a few youngsters in the cast that I have never seen or heard of before, but I've not been keeping up to date with Hong Kong's cinema scene for quite a while so it's possible they are rising stars. None of them made much of an impression.

Production values are a mixed bag... for the most part the film seems very low budget, but then there are a couple of special effects scenes that are quite slick. I have no idea how much shots of empty Hong Kong streets were touched up with CGI, but it looks like they were achieved through the old fashioned technique of telling everybody to piss off for a minute. If not, then it it is in fact a very impressive piece of digital manipulation, which suggests the film was much more rigorously put together than it would otherwise seem.

THE MIDNIGHT AFTER recently won best film and best director from the Hong Kong Film Critics' Society, which is what motivated me to watch it. I had forgotten that these are the same critics (well, the same society) that picked Wong Kar-Wai's The Grandmaster as the best film of 2013. To be fair I haven't seen many other Hong Kong films from 2013/2014 so maybe they actually are the best of a really bad bunch.

I suspect that THE MIDNIGHT AFTER appealed to the HKFCS because it is such an unashamedly Hong Kong film, full of local scenery and references with an obvious disregard for the mainland audience that otherwise dominates the industry these days. What appeal the film has largely comes from that localism... I suppose it's good that at least some Hong Kong film makers are still making films for Hong Kong audiences.