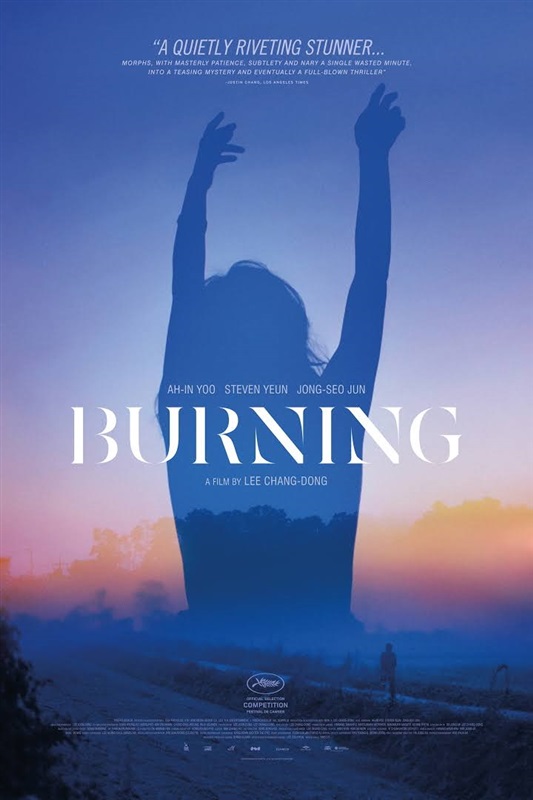 Jong-soo is working as a delivery boy in Seoul when he meets Haemi, a girl he used to live near in the small town where they were children. Haemi remembers that Jong-soo once crossed a road just to tell her she was ugly, and wonders whether he still feels the same way now she is grown up. He does not.

The two have an awkward fling but then Haemi goes off travelling, asking Jong-soo to feed her cat whilst she's away. When she returns she is accompanied by a handsome rich man she's clearly rather impressed with, but they invite Jong-soo to hang out with them and he tags along.

I hadn't seen a Lee Chang-Dong film since Oasis nearly two decades ago, not for any particular reason - just never quite felt like it (also he hasn't made many, I guess). BURNING was voted number one by a panel of film critics in the KoreanScreen.com 100 greatest South Korean films of all time poll, which seemed like a good enough reason to catch up.

High praise can be a curse as much as a blessing of course, as it can create expectations no film could reasonably meet. I don't agree that BURNING is better than My Sassy Girl, but then it is a completely different beast - it's a much more cerebral experience than a visceral one.

BURNING is definitely a slow burn, taking its sweet time to reveal its secrets or give any clue where it's heading. The film is 2.5 hours long and the first half is spent setting the scene and showing us the characters and their lives, building atmosphere. It's an approach which has evidently divided audiences as much as it has wowed critics.

Jong-soo is quite a frustrating character, never a very active presence even in his own life, and although he professes to be an aspiring novelist it's never very clear what he thinks or how he sees the world - surely a liability in that profession. He seems quite dull-witted, honestly. Hae-mi is completely different, a big dreamer who flows wherever her whims take her. Ben is completely different again, confident and eloquent, never afraid to say what's on his mind - yet remaining enigmatic despite it.

And that is the world Lee Chang-Dong has created in BURNING, like an impressionistic painting the details are never fully resolved, just enough is shown to give the viewer a sense, an idea, perhaps even a suspicion. Even as the end credits roll it's left up to us to decide what it's really about.

This sense of mystery makes for an interesting viewing experience, but the almost clinical detachment Lee puts between us and the characters meant that it did not particularly stimulate me emotionally. It's the sort of film that's great for discussions and dissections, but definitely not the sort of film that had me rooting for its characters or bursting into tears and blubbing like a baby as the credits roll - which is fine, not every film has to do that!