Directed by
Genre
What kind of guests? Angry guests. 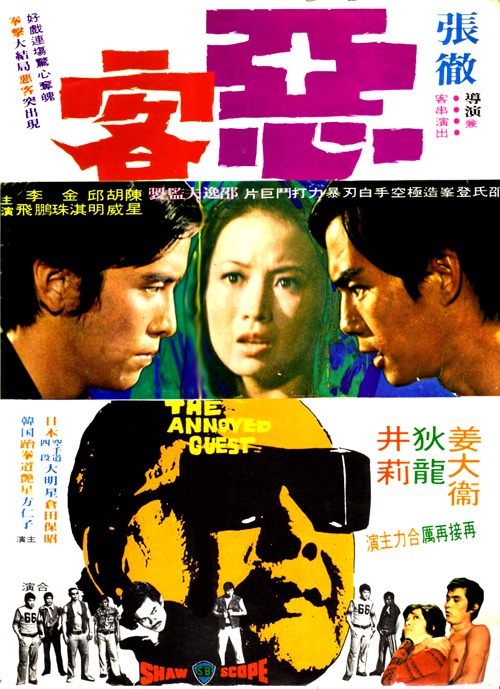 In this sequel to DUEL OF FISTS brothers David Chiang and Ti Lung are back in Hong Kong after defeating the bad guys in Thailand. It turns out that the Thailand gang was just a subsidiary of a Yakuza outfit led by Chang Cheh himself, who is so impressed with the boys that he has his men kidnap Ching Li as leverage in "negotiations" about working for him. Off to Tokyo we go.

I barely remember DUEL OF FISTS but I don't think I was particularly fond of it, finding it rather simplistic. That's largely true of this sequel as well, there's no real depth and few surprises in store, it's just good guys vs. bad guys with a bit of Tokyo skyline thrown in for colour. It was apparently the feature film debut of Yasuaki Kurata, which makes it of historical interest, but his fight scenes are a little underwhelming, very obviously not making contact.

Slightly more impressive is Korean-born Fong Yan-Ji as Kurata's female counterpart. She doesn't actually have any fight scenes, but she creates the indelible impression that she could kick your ass if she wanted to. She also radiates charisma and sex appeal, it's a shame she only seems to have two films to her name.

The film also features a rare on-screen appearance from Chang Cheh as a Bond-villainesque Yakuza chief, which is briefly entertaining (what is going on with his teeth though?), and a very cool Bolo Yeung flexing his muscles. There's a rather impressive collection of future directors and action directors to be found occupying bit parts too.

Chang Cheh's then-favourite duo of Tang Chia and Lau Kar-Leung are the action choreographers for this particular film, but I can't say it ranks amongst their best work - in fact it's kind of sloppy, though it has the occasional moment of interest, such as Yuen Wo-Ping's brief duel. Hard to believe he was ever that young.

Overall it's a pretty unremarkable film, the sort of film which makes the term "chop-socky" sound kind of reasonable, and the sort of film which had me convinced Chang Cheh was a hack for quite a while. There is some fun to be had from it, but it's mostly from laughing at stupid stuff or the wild 70's fashions. There is some interesting camera work at times and a nice jazzy soundtrack, but there are far better examples of the genre.