Directed by
Everywhere is paradise as long as you have money 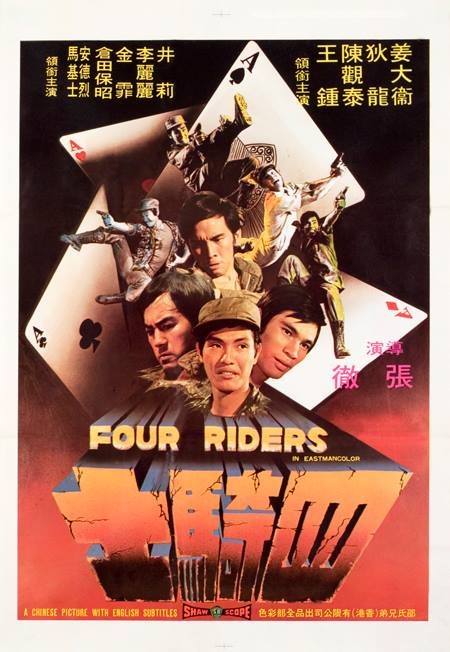 The Korean war has come to a close and left a bunch of soldiers in the country feeling jaded and with not much to do other than spend their money in the fleshpots of Seoul. Ti Lung is one such soldier, who happens upon a G.I. being beaten in an alley and tries to intervene, ending up badly beaten himself and framed for the G.I.'s murder.

Chen Kuan-Tai, Wang Chung and David Chiang all have different reasons to help Ti Lung, so they bust him out of the hospital and set about trying to prove his innocence.

FOUR RIDERS features much the same cast and crew as The Angry Guest a year earlier, but it improves on that film in just about every way. The main difference is in the script, which gives us a set of distinct and relatively rich characters and a situation with enough complexity to make it less than blindingly obvious how things will play out.

With the action moving from Japan to Korea it's perhaps ironic that one of the few cast members not to return is Korean-born Fong Yan-Ji. The film really wants us to know that they actually went to Korea to make it so there are lots of outdoor shots showing several different facets of 1970's South Korea, which seems to have been a very beautiful place even if it was still in the shadow of civil war. Somewhat unusually for the time the film makes some effort to have characters speak a language that makes sense for the situation... which results in some very unconvincing Korean dubbing, but is more interesting than just having everyone be fluent in Mandarin for some reason.

The film is also unusual in featuring a gweilo villain who's pretty good, or at least actually seems to be an actor. Yasuaki Kurata isn't quite as cool as he was in THE ANGRY GUEST but he seems to have learnt how to make his fight scenes look more convincing, as if his blows are at least in danger of landing.

The Four Riders of the title turn out, surprisingly, to be the biblical four horsemen, as is made explicit when Chen Kuan-Tai reads Revelations to a rather frightened looking Ching Li as if imminent apocalypse is something to look forward to. Obviously the Four Riders are also our four heroes, so that sets reasonable expectations for how things are going to go down when they all get together (which actually takes quite a while).

The film isn't the most action packed Chang Cheh film but it does build up to an epic final reel with a showdown in a gymnasium and a rampaging David Chiang that gives the four leads ample chance to show off their skills (along with the numerous familiar faces in the supporting cast). It's well worth the wait, and ends the film in a satisfying way.

The ending is also satisfying because the film has taken the time to create its characters and situate them in their world, so we actually give a damn about who is fighting and why. It always helps.

I didn't bother with this film when it was originally released by Celestial because it looked like a war film, and I don't much care for war films. It's certainly not a war film, but post-war Korea does provide an interesting setting and backstory for the characters that makes them feel a bit more real. Apart from the setting it's just another example of the Heroic Bloodshed genre that Chang Cheh had been exploring since Vengeance! (at least). It is one of the more well realised examples of it though.