Directed by
Genre
Enigmatic and thought provoking, but is it art? 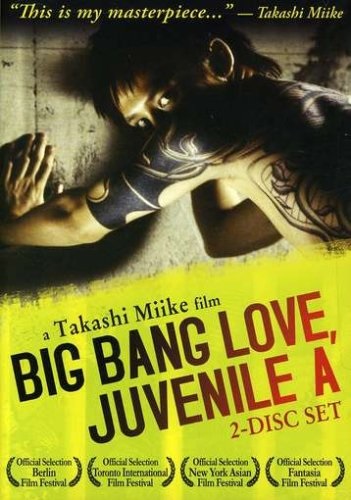 Ariyoshi (Ryuhei Matsuda) and Kazuki (Masanobu Ando) arrive at prison on the same day, both convicted of murder. Kazuki promptly sets around beating everybody up whilst Ariyoshi looks pretty and forlorn. One day Kazuki is found dead with Ariyoshi's hands around his throat. An investigation begins.

By 2006 Takashi Miike had found commercial success, he was a popular fixture at film festivals and audiences world wide lapped up his films on home video. He was perhaps not as universally celebrated critically, with some of the more high brow critics dismissing him as a shock jock whose films were only popular with audiences that didn't appreciate cinema as art. BIG BANG LOVE: JUVENILE A seems very much like it was intended as a rebuttal of such criticism.

If the US DVD box is to be believed, Takashi Miike has said that "this is my masterpiece". The film is decidedly experimental, non-linear and set in abstract spaces reminiscent of Lars Von Trier's Dogville, though not as starkly formalised. Ariyoshi and Kazuki share a cell in a prison which has views of a rocket ship on one side and a pyramid on the other, in which the other cells are just markings on the floor and the dining hall seems to be a sound stage surrounded by void.

Whilst this makes the film visually striking, as does the sometimes dramatic use of light and colour, I'm not entirely convinced there is any deeper purpose to it. Art should be about communication, and I don't know what message Takashi Miike wanted to send with this visual artifice other than "look at how experimental I am".

There are different conceptions of what art is, my own view is that art is a means to communicate ideas which cannot be communicated simply by describing them. It's only art if it seeks to make people understand something on a deeper level than can be achieved by just telling them about it. This is a fairly extreme definition that sits at one end of a spectrum, the other end of which defines art purely in terms of aesthetic experience. Those who hew towards the latter extreme will have no trouble identifying BIG BANG LOVE: JUVENILE A as an art film, but I am more equivocal. I see other reviewers claiming that the film is rich with layers of hidden meaning, but nobody seems to quite know what they are. I'm not sure Takashi Miike does either. The film certainly wears the clothing of an art film, but I'm not sure there's anything underneath.

The film generally gets tagged as LGBT and it certainly has more explicit references to homosexuality than you will find in most Japanese cinema. Whilst it's suggested that Ariyoshi and Kazuki are lovers, it's not actually unambiguously clear that it is true, though Ariyoshi does definitely seem to have loved Kazuki on some level.

The film is certainly enigmatic and perhaps even thought provoking, and I'm open to the possibility that it is indeed rich with layers of hidden meaning that I am incapable of unwrapping. I'm also open to the possibility that there is no hidden meaning and Miike is just reflecting a superficial understanding of what art films are like. His filmography is vast enough to find supporting evidence for either theory.