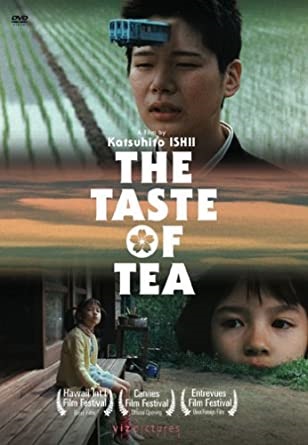 I have always felt that Katsuhito Ishii's first two films - Sharkskin Man and Peach Hip Girl and Party 7 - were unfairly maligned in many quarters. Both were quirky, stylish, clever and funny - and PARTY 7 at least was pretty original. So when the same people that had dismissed those films started saying they couldn't believe the same director had made something so much better (and different) for his third film, I was actually quite worried and held off buying it!

Well, I still think that they were wrong about SSM&PHG/P7, but I agree that CHA NO AJI (THE TASTE OF TEA) is both very different and much better! Thankfully, the things I liked about the earlier films are still present - style, wit and originality - but the overall film in which they are packaged is a definite change of pace, and perhaps a better vehicle for those qualities.

Reviewers had described the film as slow-moving and not really about much of anything, which had me thinking he'd gone austere and art-house. What they neglected to mention is that the film is also very quirky, surreal, playful and funny. At 140 minutes it might seem that a film that's "not about much of anything" is going to drag - but that's certainly not the case here.

The film is basically about the members of a family - three generations worth. Mum is an animator who retired to raise the kids, Dad is a hypnotist, Grandad is... odd... the teenage son is shy around girls, and the young daughter is being followed by a giant version of herself. Uncle Tadanobu Asano is a sound engineer by trade, but mostly just lazy, whilst the other uncle (Ikki Todoroki) is a manga artist who wants to record a song he's writing. The film spans some indefinite period of time - weeks or months - and just follows the characters as they do things, or don't do things... go places or just lie around on the porch... whatever the case may be. There are occasional diversions into other characters' stories, or stories the main characters tell each other, or little bits of fantasy and dream.

Katsuhito Ishii was one of the 3 writer/directors that made the extremely off-the-wall Funky Forest - The First Contact. After watching TASTE OF TEA, I can see that more of Funky Forest was his work than I'd realised - at least 50% of the film, I'd say. TASTE OF TEA is not so relentlessly surreal or unpredictable, but it still has the feel of "ambient cinema"... not driven by narrative, just bubbling hypnotically along with elements rising and falling in the mix, and occasional breaks into something a bit wilder or wackier - like Ambient Electronic music. The "ambient" label is deserved even more strongly in this film than in NAISU (which was too eclectic to be fully anything) - and the intent that it should be so seems reinforced by the fact the film has chirping crickets or tweeting birds in the sound mix for much of the running time (the definitive "ambient" sounds).

TASTE OF TEA was the first film that Ishii wrote as well as directed, and was made after he finished directing the anime section of Kill Bill for Quentin Tarantino (a fan of his work, apparently). It definitely shows a whole new dimension to the man's talents compared to his first two films - a truly great vision and style. The craftsmanship is remarkable, and it is one of those films that can be called "pure cinema" - something that takes full advantage of the medium, and couldn't possibly exist in any other medium. It reminds the viewer just what a wasted opportunity the majority of films on the market are (certainly those you see in the multiplexes). I wouldn't want _all_ films to be like TASTE OF TEA, of course - its uniqueness is one of its greatest strength, for a start, and it can't supplant the experience of those films that are just fun to watch after a long day at work without having to think too much. I couldn't watch a TASTE OF TEA every day, but it's definitely good to have the experience about once a month - something to remind me what films CAN be like.