Directed by
Genre
Definitely *not* a film for the easily offended. 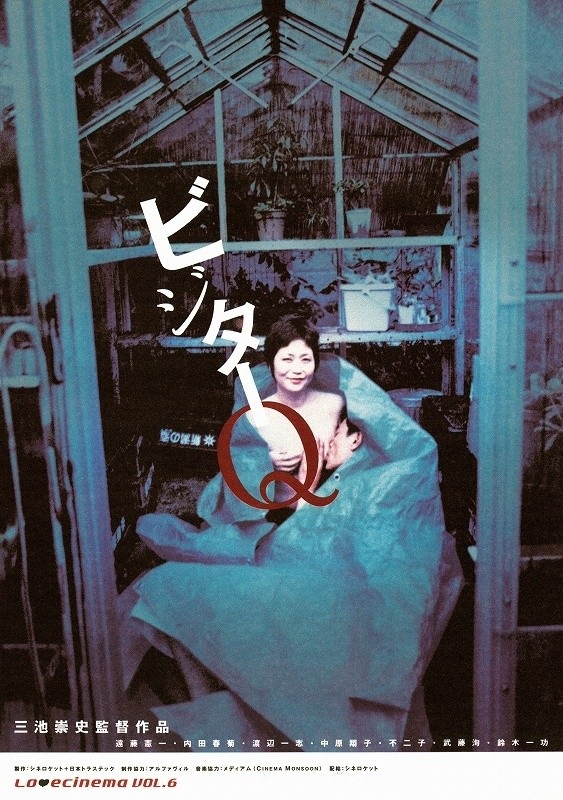 My 4th Takashi Miike movie, and the most "out there" yet. Miike seems determined to put things on film that nobody else would even consider, and the direct-to-video Visitor Q seemingly gives him the room to take this to some extremes. The basic set up is that a dysfunctional family's routine of misery is interrupted when a mysterious man (presumably Visitor Q) smacks the father on the head with a brick, then follows him home and moves into the house. His influence seems to set off a chain of events that brings the family closer together... in their own way :)

Visitor Q starts off shocking, with a man interviewing a young teenage prostitute about her career. We get the view from his video camera, cut in with still pictures that she takes of him. As the interview progresses, she seduces him and they end up in bed. The scene is quite explicit, or it would be if not for the highly blurred circles that are used to 'protect' the audience. The first real hint of what is to come is when we learn at the end of the scene that the man is actually the girl's father. And from there, the situation degenerates!

I'm not sure how many people walked out of the theatre for this one (counting walk-outs in a Miike movie is always fun!), but I'm sure there were quite a few. Certainly as the film reaches its lowest depths (about 1/2 of the way in) you're not sure whether to laugh or squirm. But laughing is the healthiest approach, and Miike makes it alright for us to do so. After taking the film down that far, VISITOR Q redeems itself by pushing its depravity into absurdity, and then lifting something good out of it. As with DEAD OR ALIVE, those who made it to the end were all smiling and laughing as they left the theatre, if a little brow-beaten. Miike definitely challenges the audience to stay in their seats through Visitor Q, but for those that pass the challenge, there is definitely a reward.

Definitely *not* a film for the easily offended. Or even the "really quite hard to offend, actually"!