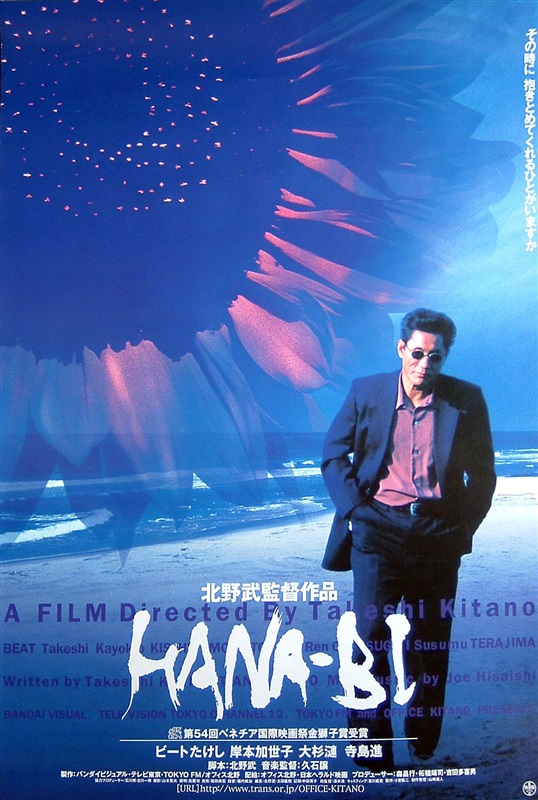 A stakeout gone wrong leads to one officer dead and another in a wheelchair. Detective Nishi is unharmed, but the brush with mortality makes him realise he should be spending more time with his wife, diagnosed with terminal cancer, and to make the time they have left together precious.

HANA-BI is widely recognised as Takeshi Kitano's masterpiece, and one of the most accomplished films in Japanese cinema. It was made after his own brush with mortality, a motorcycle accident that left his face partially paralysed. Whilst recuperating he took up painting, and many of the unique paintings featured throughout HANA-BI stem from that period. Kitano channelled these experiences into this most personal of films.

The word hanabi (花火) means "fireworks" but Kitano separates it into its component particles, hana (花) meaning flower and bi (火) meaning fire, highlighting the duality inherent in the word. Flowers are a recurrent visual motif in the film, representing life, beauty and peace, occasionally interrupted by (gun)fire - chaos and danger.

Kitano has said that his accident was an unconscious suicide attempt, and the recurrent suicidal imagery in his films suggests that this is something he has long struggled with. HANA-BI reflects on the beauty and pain that life can bring, and the difficulty of avoiding one without missing out on the other. 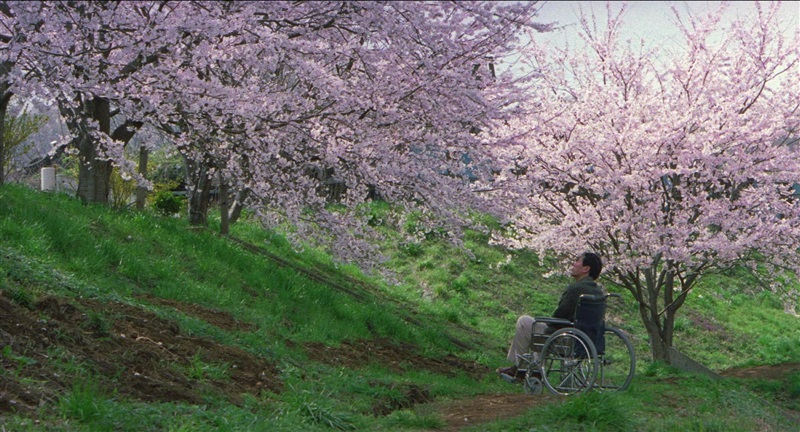 Nishi is a typically taciturn Kitano protagonist, but Kitano has never really needed words to communicate. He uses stillness and silence to masterful effect, such that the tiniest movement or expression can speak volumes. Kayoko Kishimoto somehow speaks even less in this film, but the words she speaks at the end are basically everything that ever needed to be said, by anyone.

HANA-BI is probably as close to cinematic perfection as anybody has achieved, a film of such profound beauty and profound sorrow it hardly seems fair that we mere mortals are able to watch it. It's such a precious film I'm always afraid that I will fail it as a viewer, unable to give it the attention it deserves.

People often recommend HANA-BI as the place to start exploring Kitano but I think that's a mistake. It's a film you need to build up to, you will appreciate it more if you've seen his earlier films first. It's like starting with dessert. HANA-BI is the culmination of everything Kitano wanted to say up to that point, and I think at least Violent Cop, Boiling Point and Sonatine should be watched first to fully prepare for it.

HANA-BI was the film that finally made Japanese audiences start taking Kitano seriously as a film maker though. After it won awards at international film festivals they realised that this wasn't just the frivolous hobby of a television comedian but the work of a visionary artist.