Directed by
Genre
Happiness is just sadness you haven't reached yet 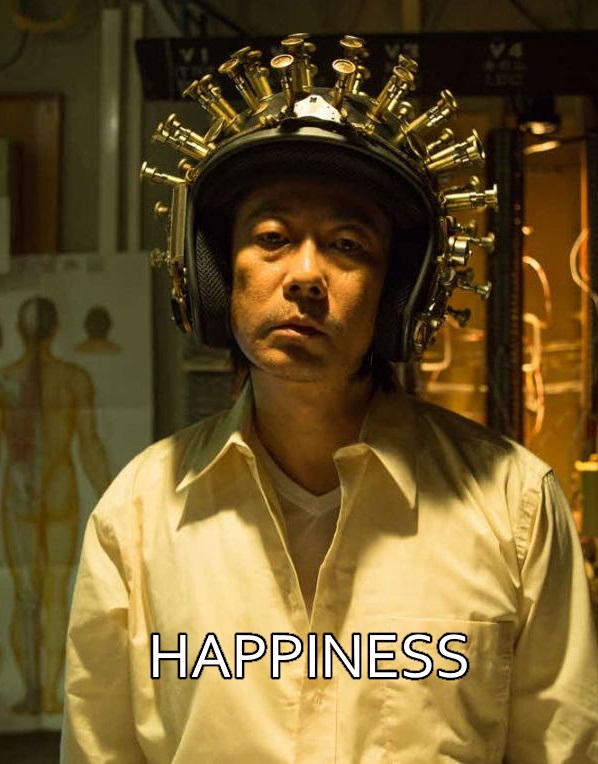 A man arrives in an economically and socially depressed Japanese town carrying a Happiness Helmet, a device that enables people to relive their happiest memories. After convincing the mayor of its effectiveness the townspeople hope that the device will revitalise the town's fortunes, giving people hope and restoring their spirit. But why does the man with the Happiness Helmet seem so sad?

Sabu's HAPPINESS might more accurately have been called DEPRESSION, it's one of his darkest films - even as we watch people undergo a transformation when reminded of a precious memory from their youth. The mayor observes that he had forgotten most of the good times in his life and remembered only times when he was embarrassed or ashamed.

We gradually come to understand that a person's happiest moment and their darkest are often intrinsically linked. If we had never experienced happiness, could we truly feel its absence?

I can relate to the concept, my brain skews towards the depressive side and I will frequently forget about good times completely but remember the slightest shame or hurt forever. It seems to be a self-reinforcing condition and sometimes a simple positive experience will shift my perspective and recolour the world in brighter hues - for a while, at least. I would quite like a device I could plug in to give myself that lift when I needed it.

I think that depression is a defence mechanism though. If you give yourself over fully to something or someone then the pain of losing them might be more than you bear, an acute sadness made all the more raw by its proximity to joy. By convincing yourself that the world is bleak you shield yourself from the possibility of feeling hope then having it taken away. It may seem dysfunctional but it's not necessarily an illogical path for your subconscious mind to choose.

HAPPINESS seems to be exploring a similar idea, and though I don't know anything of Sabu's personal life I can only imagine that it came from a place of darkness.

Masatoshi Nagase is captivating in the lead role, the sorrow and weariness etched into his face and radiating from his posture tell you everything that the sparse dialogue omits. The film uses muted colour palettes and performances with minimal camera movements, punctuated by vivid colour and motion in recalled memories, showing that they are more real than the here and now for those experiencing them.

HAPPINESS is another idiosyncratic work from Sabu, further removed from his early comedies than ever - though perhaps the third act of Monday is its closest comparison. It's yet another Sabu film that has been criminally ignored, I had to jump through hoops to see it. Whilst this might not be the first film you'd show somebody to introduce them to Sabu it's a notable entry in his filmography and would be great in a box set with, say, Usagi Drop and Mr. Long. Somebody make it happen!