Directed by
Genre
Expect a challenging and thoughtful film 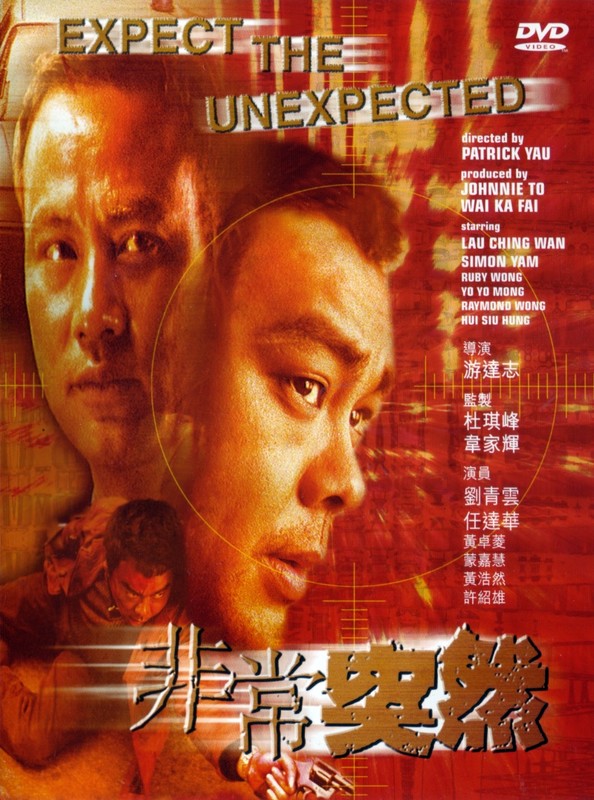 A bunch of incompetent thieves from the mainland rob a jewellery store in Hong Kong, but when police track them to an apartment complex they unwittingly stumble upon the hideout of another gang who are far better armed and ruthless. Detectives begin investigating what this group might have been planning, and find that one of the key witnesses is a childhood friend of both squad leader Simon Yam and subordinate Lau Ching-Wan. Dormant feelings stir.

This is one of the earliest Milkyway Image productions, ostensibly directed by Patrick Yau but Johnnie To has stated that he wasn't satisfied with Yau and stepped in to direct most of it himself. It certainly feels like a Johnnie To film - albeit the Johnnie To films that would come after it more than those that came before it.

Johnnie To had spent the best part of two decades working as a reliable director for hire, honing his skills, but after big names like Tsui Hark and John Woo jumped ship for Hollywood as 1997 approached he stepped up to fill the void and had soon reshaped Hong Kong cinema. He seems to have believed it was important for Hong Kong to defend its unique cultural identity and resist being absorbed into that of Greater China, and the former colony often seems like a supporting actor in his films.

The rain should probably get a credit too in this one, it is almost as much of a character as the criminals - and certainly gets more screen time. The city is perpetually soaked by a near constant deluge, no doubt symbolic of the mood at the time.

The film tells you what to expect in its title - or rather, that you will fail to expect it. This is true on several levels, e.g. the cops encountering heavily armed criminals whilst investigating a petty crime, or the investigation sometimes taking a back seat to the personal lives of the squad, which are as messy and complicated as lives tend to be. It's fair to assume that neither the characters nor the viewer will expect everything that's coming their way.

It's obviously hard to talk about that without spoilers, but if we're reading the film as a metaphor for Hong Kong's future relationship with the mainland, it seems like To thinks it might get rocky.

EXPECT THE UNEXPECTED was made right after Hong Kong was returned to Chinese rule, and is dripping with post-handover anxiety. The mainland is depicted as a place of desperation, a source of fear and uncertainty and a social order fundamentally at odds with Hong Kong's own. Hong Kong had long been distrustful of the mainland and tended to look down on its people and its culture.

It was interesting revisiting this film after a long time and watching it as a double bill with Drug War, made 15 years later when much of that uncertainty was now history. Drug War acknowledges that Hong Kong's future is inextricably entwined with the mainland, and that China is a very different place 15 years later - but perhaps also suggests that some of his concerns have been validated.

EXPECT THE UNEXPECTED is technically accomplished, with gorgeous cinematography and some well choreographed and filmed action scenes - quite deliberately nothing like the over the top bullet ballet that Hong Kong was best known for before the handover, more gritty and realistic. One minor quibble is that the soundtrack sticks out more than it should, and is not as effective as those in later Milkyway films.

Performances are great, as you would expect with Simon Yam and Lau Ching-Wan leading the cast, both excellent actors that work especially well with Johnnie To. A baby-faced Raymond Wong is instantly likeable, whilst Hui Siu-Hung and Lam Suet provide some comic relief and some genuine heart. Ruby Wong pulls off a difficult role as a woman whose male colleagues all see her as "one of the boys", whilst Yoyo Mung has a more straightforwardly feminine part but avoids being just a passive love interest.

I don't think I was able to appreciate this film 20 years ago, never having been to Hong Kong and only having a superficial understanding of what life was like there before or after 1997 - the anxieties people felt when their whole society was turned upside down. It's now clear that "one country, two systems" is dead well before its 50 year expiration date (and that the UK is in no position to fulfil its role as guarantor anymore). Recently passed National Security laws have effectively criminalised making films that portray China in a negative light, so we won't be seeing the likes of this again, and since it can now be enforced retroactively people in Hong Kong might one day never even know they existed - thank the lord this one got a very nice bluray release courtesy of Spectrum Films recently, along with a number of other Milkyway Image titles that had been poorly served before. I have uploaded English subtitles that sync to it, based on the old DVD subs with a lot of corrections, to OpenSubtitles.