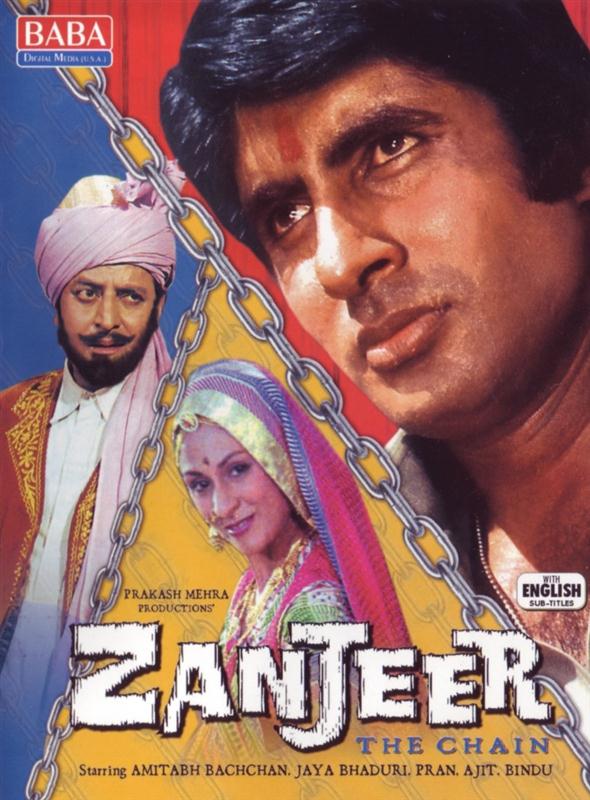 As a child, Vijay witnesses the murder of his parents by their unscrupulous employer, worried that pops will spill the beans on his "spurious injections" business. As luck would have it, Vijay was hidden in a wardrobe at the time and all he sees of the killer is his golden chain, with a cute little plastic horse dangling from it.

20 years later, Vijay has morphed into Amitabh Bachchan and is a police officer, always in trouble with his superiors because of his tendency to take crime as a personal affront and use any means available to punish its perpetrators. He's a very serious and intense young man, haunted by nightmares of his parents murder.

Prior to 1973, the name Amitabh Bachchan was not revered amongst Indian cinema goers as it has been ever since. Indeed, Amitabh was considered to be box office poison at the time, and director Prakash Mehra was thought to have gone mad for choosing him as the star in his new film Zanjeer. History appears to be on Mehra's side, for Zanjeer was a resounding success and created the "Angry Young Man" image for Amitabh Bachchan that dominated Indian cinema for the next decade.

Zanjeer follows the same pattern as many of Amitabh's films - or rather, many of his films follow the pattern of Zanjeer, I guess. Amitabh has proven himself a very versatile actor, but it is the driven intensity he brings to roles such as this that made him Bollywood's undisputed king. Driven by a rage he cannot release, he tears up the screen and the bad guys but remains vulnerable and easy to empathise with.

Bachchan is joined by some interesting characters - the larger than life good-bad guy Tiger played by Pran, and the sassy gypsy girl played by Jaya Bhaduri, who was Bachchan's love interest and later his real-life wife. Unfortunately the bad-bad guy is less charismatic and interesting than he might have been - he is cold and cruel, but not as "villainous" as he might have been.

I don't know just how original Zanjeer was at the time of its release... it seems to follow a pretty conventional formula, but the impression I get is that it largely created this formula. Perhaps similar plots were covered before, but I can't imagine anybody filling such a role as well as Amitabh. Certainly Zanjeer was a runaway success, and a profoundly influential film.

Sadly, in this case 'first' does not mean 'best'. Although it's certainly a solid film, it's not as well scripted as other films along similar lines, and Amitabh doesn't have the cocky confidence that he would quickly develop and employ so effectively in his numerous star roles. I guess everybody involved was still finding their feet a little, so it's not surprising that the elements presented here would be improved on in later films.

The conclusion I draw is that ZANJEER is not the best starting point on an Amitabh adulation path, but is definitely worth picking up once such a path has been a little trodden in.

My enjoyment of the film was doubtless hampered somewhat by the DVD presentation, which is clearly heavily cropped - most obviously at the bottom of the screen, where a good 20% must be missing. This was probably done to get rid of subtitles burnt into the print used for mastering, but unfortunately you lose a lot along with the subs - people's mouths during close-ups, for instance. I think it was also cropped at the sides, possibly to preserve aspect ratio. It may even have been a 4:3 film originally though, cropped to more than 1.85:1. Whilst this cropping (and general print wear and tear) does not ruin the film, it's definitely an impediment to full appreciation.