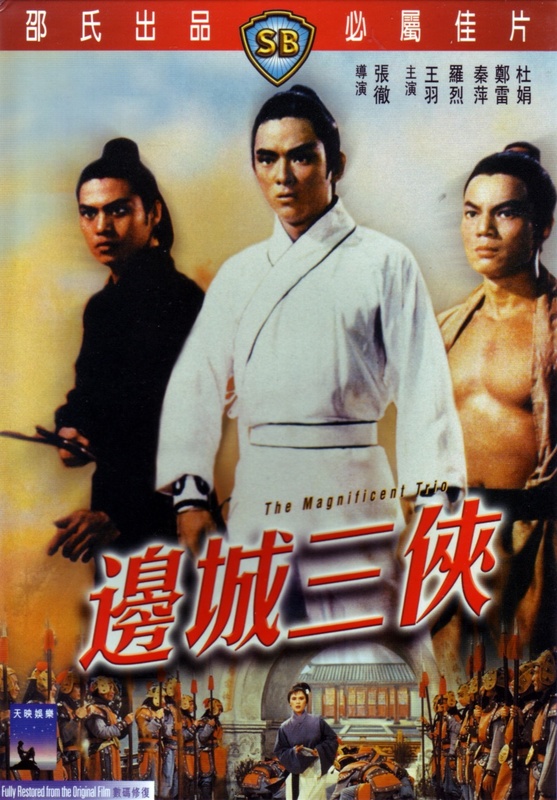 A swordsman returning from defeat on the battlefield happens upon a trio of men tying up a woman in a barn. The men explain that it isn't what it looks like, she is the daughter of a corrupt official who has been squeezing their village to breaking point, and they want to use her as a negotiating aid. Convinced of their basic good nature if not good sense, the swordsman decides to hang around and help their cause, offering to present their petition to his high ranking uncle.

THE MAGNIFICENT TRIO was released nearly a year before THE ONE-ARMED SWORDSMAN and only a month after Come Drink With Me, but for some reason it doesn't seem to get much attention. I'm not sure why because it's a solid piece of film-making, with a story that reminded me of Akira Kurosawa - possibly just because I watched it right after SANJURO, but there are some clear parallels with that film.

Chang Cheh's direction is sharp and dynamic, with some interesting camera work and plentiful well-choreographed action from Lau Kar-Leung and Tang Chia. Jimmy Wang Yu is in good shape, already having mastered the constipated, slightly puzzled expression that was his trademark, and Lo Lieh positively smoulders.

Oddly it's the women that get top billing in the credits with the men being listed as co-stars, despite the fact they have vastly more screen time. Perhaps it is because the most successful wuxia films were female-led in those days, a fact Chang Cheh was apparently not pleased about and consciously sought to change with his work.

I was sad to read that top-billed actress Margaret Tu Chuan died just a few years later by "committing suicide by taking an overdose of sleeping pills with a female lover after a failed marriage" according to Wikipedia.

It is clearly the men that are the real stars in Chang Cheh's eyes though, and his themes of brotherly loyalty and self-sacrifice are already on display. It baffles me that it was Jimmy Wang Yu that became the superstar rather than Lo Lieh, who was more capable as an actor and a fighter and more darkly handsome (to my eyes). He always seemed to end up in supporting roles though, with the notable exception of King Boxer.

I suppose it's rude not to mention Cheng Lui to complete the trio, he's... fine?

I think it's time for a reappraisal of THE MAGNIFICENT TRIO, put in its historical context it seems to me to be an important work that helped establish Chang Cheh's cachet as a director of martial arts films (along with the sadly lost TIGER BOY, which featured much of the same cast and crew), and his subsequent influence on the genre(s) is obviously hard to overstate. It's also a fine piece of entertainment.

Side note: the HD transfer available on iTunes (and presumably Amazon) has a messed up audio mix in the fights, it's the one case I can think of where the 5.1 audio on the IVL DVD is actually cleaner.