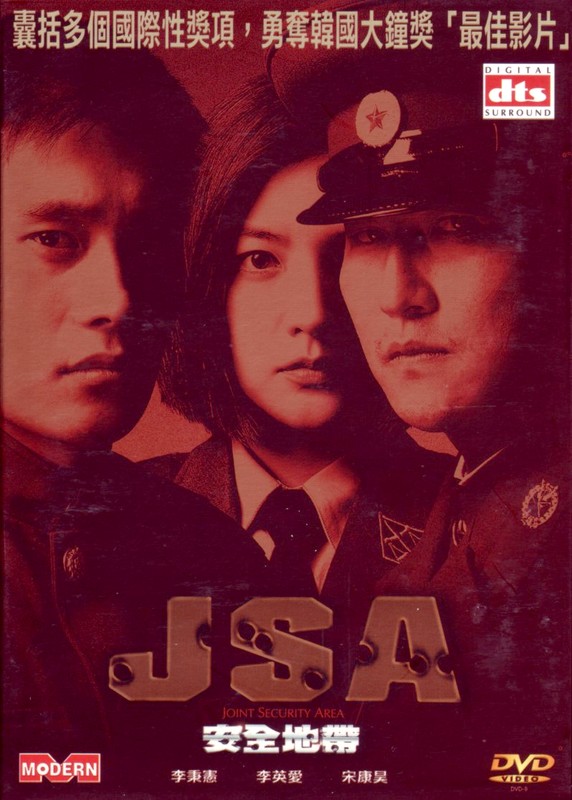 One of the most talked about Korean movies since the west's sudden fascination with the country's cinematic output a few years ago, pretty much universally acclaimed by those who'd seen it. The movie often gets discussed in the same sentence as Shiri - largely as an anti-SHIRI (which to me has to be a good thing). Where SHIRI is all surface gloss and no substance, JSA is very nicely filmed but all substance. Not an action movie (so comparisons with SHIRI are a little unfair), but a character driven drama with a strong political message.

The setting is the Joint Security Area - the zone between North & South Korea where the forces of each side guard their borders. A thin line on a bridge marks a division of hatred between two countries that used to be one. One night, there is an incident where bullets are fired, leaving 2 North Korean soldiers dead and one wounded. A South Korean soldier has confessed to the shooting, but both sides offer radically different stories as to why it happened. A young female officer of Korean ancestry, but raised in Switzerland and now a member of the Neutral Nations 'army', is sent in to mediate between the two sides, and try to find out what really happened that night... which side, if any, is telling the truth.

The movie takes place largely in flashback, as the officer tries to piece together the truth from cross-examination of the survivor from the North and the perpetrator in the South. As she digs deeper, it quickly becomes clear that the official explanations offered by both sides are not the truth, or not the whole truth. As we learn more about the characters involved in the incident and their histories, it becomes harder and harder to know why the incident would have happened.

The movie's main strengths are very strong characters and excellent performances. Unlike SHIRI, characters from both North and South are given fair treatment - definitely human, for better or for worse. The basic message behind the story is that the division is hurting both countries, with the soldiers right on the border serving as particularly immediate examples. The message is one of tolerance and trust, but tempered by a feeling of pessimism. The feeling is that the governments on each side are the source of all the trouble, but its the people that are suffering as a result. The role of the US in the situation is questioned too. Ultimately the message is a sad one, a lamentation of the state of affairs as they are. But implicit in that is the hope that things can change in the future.

I don't know much about the history or politics in Korea - more than I did before watching JSA, clearly, but not nearly enough to know if its assessment & message are fair and reasonable. It certainly sounds like it, but I'm sure that there are many other factors that the movie doesn't address. The central theme that governments make decisions but people bear the consequences is one that rings true to me, however.

Outside the message & morals, is JSA a good movie? Certainly yes - beautifully filmed and scored, a tight script and excellent performances. Not the kind of blockbuster-potential that something like SHIRI has, but certainly a lot more food for thought.