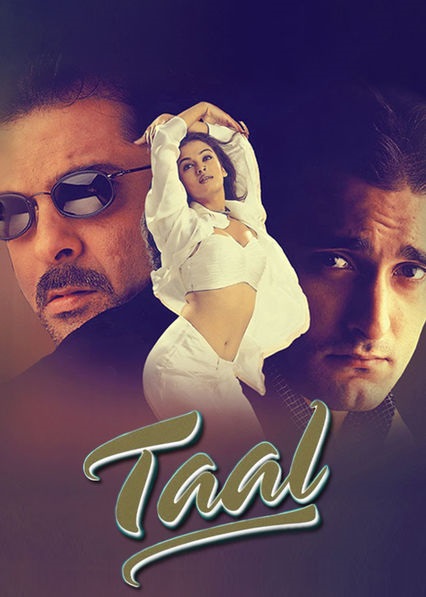 Manav (Akshaye Khanna) is the scion of an obscenely wealthy family, who returns from studying with the expectation that he will join the family business. He travels through rural India to a site scheduled for development, eventually chancing on poor village girl Mansi (Aishwarya Rai) singing A.R. Rahman songs in the rain. Naturally, he falls in love, but his family won't accept her, yada yada yada.

Like so many Bollywood films, TAAL is essentially a Romeo & Juliet story, with the path of truth love never running straight and pitting good, pure traditional Indian family values against the influence of the modernised West and its love of money and power (much is made of the imminent 21st Century).

At one point Mansi catches the eye of music producer Vikrant (Anil Kapoor) who has become rich and famous by taking the family's traditional village songs and remixing them as brash pop music - giving them no credit, and feeling no shame for that. He sees a potential star in Mansi, and eventually a potential wife.

TAAL invites comparisons to RANGEELA, not least because of its iconic A.R. Rahman soundtrack. This is certainly the soundtrack I'd listened to the most without having watched the film, and it's probably the only serious competition to Dil Se for A.R. Rahman's best work.

Whilst RANGEELA is a sharp satire of the Bollywood dream factory though, Subhash Ghai embraces it. At one point Manav reassures Mansi this isn't going to be like those Hindi films where the city boy abandons the village girl, but then almost immediately does so.

The film is therefore mostly predictable, with a rather blandly conservative message - India's traditional virtues of purity and chastity are more beautiful and meaningful than the false gods of the West. Well it's easy to make that case when they're embodied in Aishwarya Rai, isn't it?

Other than its magnificent soundtrack and Aishwarya's indisputable beauty, TAAL doesn't have a lot to offer. Akshaye Khanna isn't particularly convincing as a romantic lead - at least Anil Kapoor has some fun with his part. Everybody else hams it up, but it doesn't seem like they're doing it deliberately.

There's some nice cinematography, mostly in the musical numbers - convenient, since they're the only parts I am ever likely to watch again. Such great music definitely deserves a better film... maybe somebody can take a lesson from Vikrant and "recontextualise" the music into a better script.